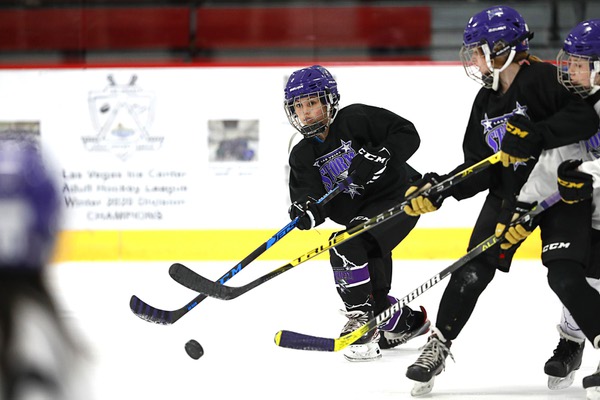 With the Golden Knights here, youth hockey thrives in the valley (and not just for the boys)

When Brittney Brooks was growing up in Las Vegas in the early 2000s, there were no girls’ hockey teams.

She skated with the boys until she left the Valley during her senior year of high school to gain the attention of college scouts. After a year in Colorado, she attended Colgate University in New York City, where she played three seasons as a goaltender.

The Storm beat the Jr. Golden Knights 3-0, winning a trophy from a tournament that also included teams from Southern California and Arizona.

What makes the duel even more remarkable is that the two Las Vegas teams were both in their inaugural season.

“We both went to the finals and then in the tournament, we led the tournament with the Vegas kids, which is pretty amazing,” said Brooks, the Storm’s trainer and whose family owns the Las Vegas. Ice Center.

Brooks’ hope is for youth hockey here to continue to thrive where top players don’t need to venture out of state to be noticed by scouts.

To that end, there is the Pacific Girls Hockey League, a USA Hockey sanctioned Level II circuit that launched this season. The Storm and Jr. Golden Knights play in the league, which includes teams affiliated with the Los Angeles Kings, Anaheim Ducks and Arizona Coyotes.

In addition to the Under-12 team, the Storm has an Under-16 team, which Brooks says would help with the development and recruitment of young players.

Nyna Cruchet, the 11-year-old Under-12 Storm captain, said she got into hockey because her father and older brother were playing and the family had season tickets to the Golden Knights .

She jumped at the chance to participate in local learning to skate programs. She initially had to play on a boys’ team, but then skated on a girls’ team with the Golden Knights Jr. before joining the Storm under-12 girls’ team.

“It’s really good because it’s just a better connection with my teammates than when I play with boys because usually I’m the only girl,” said Cruchet, who led the weekend tournament. last with seven goals.

Originally from North Dakota, his father, Sean Cruchet, has played in adult leagues in Las Vegas since he moved here 20 years ago. Nyna’s brother Xavier, 13, plays for the Storm under-14 team.

“It’s good to have this level of competition, girls only,” said Sean Cruchet. “Often, if there aren’t enough girls ‘teams, sometimes the girls have to play against boys’ teams, and if it’s like a 12U girls team, they play a 10U boys team, and it’s just not the same. “

The Storm program has been established for a long time, although the women’s team is more recent. The Jr. Golden Knights are a younger program, formed after the NHL arrived in the Valley. Owner Bill Foley’s plan to expand the game to Las Vegas was to invest in programs for young people, knowing that the only way Las Vegas could turn into a true hockey town was to involve a younger generation in all. aspects of sport.

The Jr. Golden Knights have 12 teams at different levels, including two women’s teams. While the women’s team formed last season, this is the Under-12 team’s first full season after the COVID-19 hit last year.

The arrival of the Golden Knights had a ripple effect on all levels of hockey in Las Vegas.

Darren Eliot is Executive Director of the Jr. Golden Knights and has over a decade of experience growing hockey locally in Las Vegas, Michigan, Anaheim and Atlanta. He knows what an NHL team can do for the local hockey scene.

In the season leading up to the Golden Knights’ inaugural campaign, there were 92 registered under-8 players – boys and girls – in the valley, Eliot said. Last season, they were 810.

“The biggest thing the Golden Knights have done is expand the base of hockey,” said Eliot. “The notion of having all levels of competitiveness is really centered on having as many children as possible in the game, not a random team here and there chosen by the parents. It’s the difference having an NHL team with a vision and people who are used to building programs.

The growth of youth hockey in Las Vegas, especially on the girls’ side, was fully visible in Anaheim this past weekend.

All of the top scorers were either Storm players or Jr. Golden Knights, helping them to finish first and second.

There are also girls in various house leagues in Las Vegas, but between the Jr. Golden Knights U10 team, Storm U16 and U12 teams from both programs, there is has more opportunities than ever for valley players. .

“We’re basically growing,” said Nyna Cruchet. “We are fighting against each other to see who wins and which team is the best.”