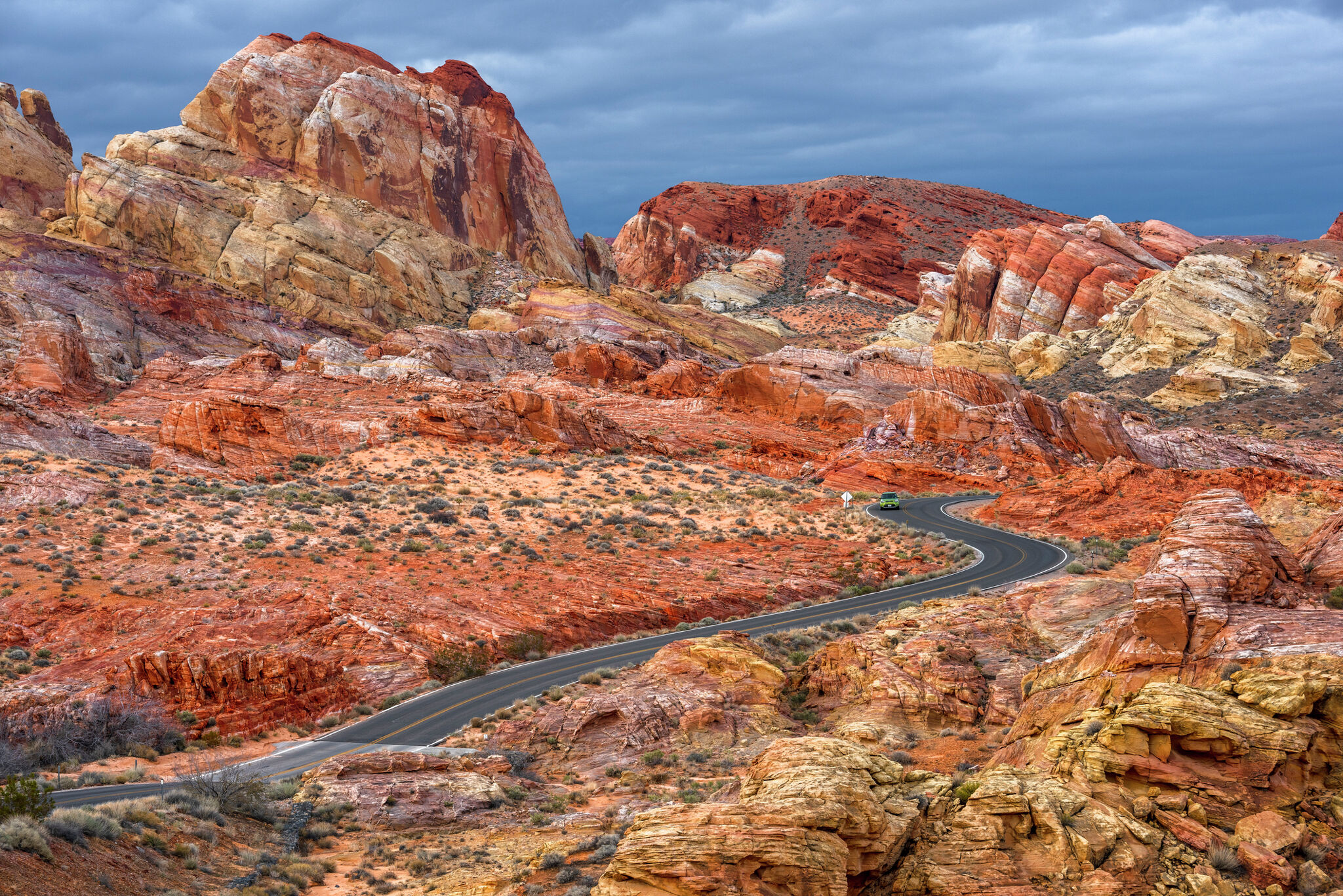 As we cruised through Valley of Fire State Park in southern Nevada, the sandstone formations on either side of the car grew increasingly fiery red and jagged.

“It looks like Joshua Tree, except with a hellscape filter,” I said.

“Or Mars, but far more evil,” replied my partner Steve.

For the next few minutes, we stared out the window at the distorted Crimson Mountains. They were disturbing, sure, but there was an undeniable horror-movie-style appeal, and we couldn’t look away. The landscape of Valley of Fire was like nowhere else we had ever been, and the hellish part was just the beginning.

There was just one thing about this park that really upset me: why didn’t anyone tell us to spend more time here? The location isn’t exactly unfamiliar, but this was our fourth trip to Las Vegas in six months, and not a single person encouraged us to visit Valley of Fire, about 43 miles from Sin City.

If we had known that riding Route 169 through the park would be like riding in another terrifying dimension, we could have planned this. Instead, we pressure him on the way back from Zion National Park to Harry Reid International Airport. We had 30 minutes in the park, and it was far from enough.

Because the visit was a last minute detour, we hadn’t even read the park’s literature. This would have given us a useful explanation for the 46,000 acre park: Millions of years ago the valley was submerged under the sea, which eventually receded and left behind mudflats, slow-moving streams and finally, a vast desert of sand dunes.

Layers of sediment formed on the dunes and mixed with groundwater, and the results were cemented into the sandstone. Wind and water have done their best over the millennia, putting the finishing touches to this terrain.

Upon entering, we tried to pay the $10 fee at an entry kiosk, but it was broken. There was no one to point out any of the highlights, for example, the ancient petrified trees, the slot canyons, or the 2,000 year old petroglyphs carved into the sandstone by the native Puebloans.

We lucked out almost immediately, however, spotting two bighorn sheep standing atop a red hill near the entrance. Normally we would have stopped and watched for a while, but our flight was in four hours and the Vegas airport is wild. I took a distant, terrible photo and we continued driving.

There was no time for Elephant Rock, the pachyderm-shaped natural arch that would have been a great photo op. We blew by the Seven Sisters, a group of eroded and bumpy rock towers where the smartest travelers stop to eat a picnic. Turning north, we passed the visitor center, which apparently has exhibits about the park’s geology, ecology, and prehistory.

We kept rolling and were stunned as the surrounding colors changed from deep reds and blacks to pastel yellow, creamsicle orange, pale pink and light purple. Depicting exposed minerals like iron oxide, silica, and manganese, the colors swirled like melted candy canes, creating another otherworldly landscape that truly tripped us up.

“Now it’s like Joshua Tree on acid,” I said.

“We really should have camped here,” Steve said.

There is a 1 mile trail to a place called Rainbow Vista, the most colorful place in the park. We seriously considered missing our flight to hike there, but eventually our practicality won out and we kept riding. We even skipped over the park’s most famous feature – the Fire Wave – a bowl-shaped depression with a wave-like rising point featuring vibrant red and pale pink stripes. It’s a 1.5 mile hike, round trip, to take in this breathtaking natural feature.

Arriving at the end of White Domes Road, an out and back and the park’s main attraction, we turned around and headed back onto the highway, this time heading west. As we exited, we passed the beehives, conical sandstone monoliths formed by multiple layers of silt deposited over time.

On our way out, a guard from the ranger station asked to see our ticket, which we didn’t have. He let us pay the $10 there, which we gladly handed over. We told the ranger that the park far exceeded our expectations and that we would absolutely return with camping gear.

For anyone planning to go in the summer, note that temperatures can soar into the high 100s during the day and stay in the high 90s until late in the evening. So bring plenty of water. After all, if you’re going to be spending time in hell, it never hurts to be prepared for the heat.