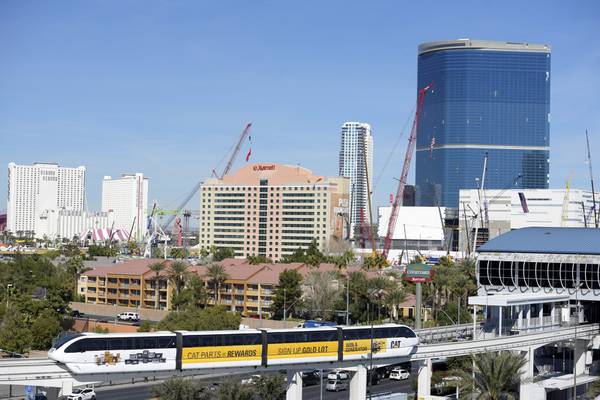 Travel agency in talks to take over Las Vegas monorail

The Las Vegas Convention and Tourism Authority is in talks to buy the Las Vegas monorail, the head of the tourism group said.

â€œWe believe the monorail is an important transportation option when the destination is at full capacity,â€ Steve Hill, President and CEO of LVCVA, said at a board meeting today.

â€œIt travels nearly 5 million a year, and a lot of those people are attendees here at the (Las Vegas) Convention Center. We want to make sure that the monorail system has the capacity to continue to operate for years to come, â€he said.

The elevated train, which runs a 3.9 mile route along the Strip, is owned and operated by privately-held Las Vegas Monorail Co.

Conversations about acquiring the monorail were launched in January but were accelerated in the wake of the coronavirus pandemic, which caused the monorail to shut down in March, Hill said.

Hill did not set a timeline for a deal and declined to answer questions about the ongoing talks after today’s meeting.

However, opposition to the deal emerged almost immediately from Las Vegas Mayor and LVCVA board member Carolyn Goodman.

Goodman called the monorail a “bottomless pit” for money and said it would make more sense for a company like MGM Resorts International to buy it.

“I would be absolutely opposed to LVCVA funding it,” Goodman said. â€œIt’s partly because he doesn’t go to the airport and doesn’t go downtown. It serves MGM properties a lot, and they were considering purchasing it in order to take the monorail to Mandalay (Bay) so that it could serve the Allegiant Stadium.

Earlier this month, a spokeswoman for Las Vegas Monorail Co. said the nonprofit hopes to be back in business this summer.

In October, the Monorail Co. announced it had funding for a new station – it now has seven – to service the Sands Expo Center, the Venetian, and the under-construction MSG Sphere entertainment complex.

The company also announced plans to expand further south on the Strip, with a new station near Mandalay Bay. These plans are on hold at the moment.

Asked for comment, Monorail Co. officials did not directly address the sale talks. Instead, the company issued a statement saying it was “exploring ways to open up the system at the right time and help the tourism economy recover, while ensuring the system’s future viability.”