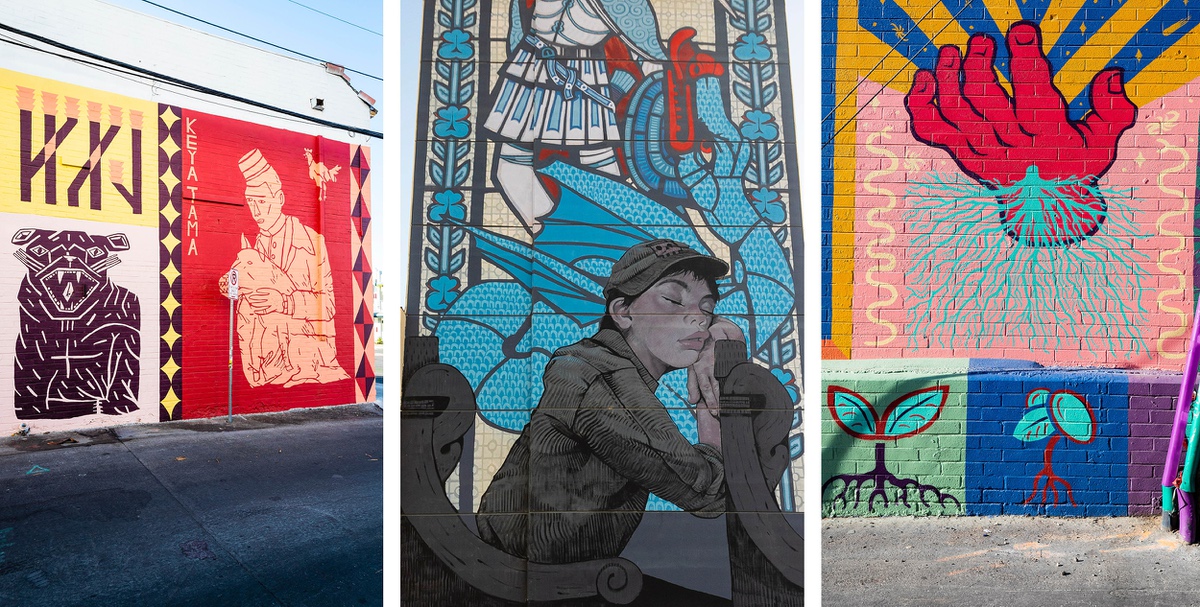 The Las Vegas Valley boasts an overabundance of white cinder block walls. Large. Some have plaster on them; some are painted in sandy hues; some are blocked by a bit of greenery, usually the skinny stems of palm trees. But over the years, some have been covered by Southern Nevada’s rarest commodities: art. Beginning in the late 1990s with the buildings and alleyways of the 18b Arts District and accelerating with the introduction of the Life Is Beautiful festival in the fall of 2013, the Valley enjoyed the street art equivalent of a superbloom, and he shows no signs of letting up. Murals by local and international artists cover the hallways of Fremont East and the Downtown Arts District almost in their entirety. New murals join older works in the Water Street area of ​​Henderson. And the phenomenon is not limited to the outside; you can now find bold, colorful murals at businesses across the valley, including major casinos like the Cosmopolitan and the Palms. If you haven’t seen the writing (and pictures) on the wall yet, there’s no better time than now – and you don’t even have to jump in your car, and again. less to get off. Follow us as we take you on a tour of the Valley’s growing collection of world-class street art and murals.

Mural by Agostino Iacurci, on 7th Street between Fremont and Ogden

Italian artist Agostino Iacurci (agostinoiacurci.com) created this lively, brightly colored landscape artwork for the 2021 Life Is Beautiful festival at the request of “global creative house” JustKids, which commissions new street art for the festival each year. Other artists have painted this wall for past LIB events – a piece by Dead Stockton, aka D*Face, covered it for several years – but Iacurci is the first to consider it a wallwith painted passages and support columns.

Mural by Keya Tama, on 7th Street and Ogden Avenue

Commissioned for Life Is Beautiful 2021, this work by Keya Tama (keyatama.com) was completed shortly before the South African-born artist’s 24th birthday. (If Tama’s style seems very confident for someone so young, it’s because he’s been working steadily since he was 13.) He brings those bold, confident lines to other mediums as well, including including textiles.

Reno-based woodblock print and muralist Nathaniel Benjamin (nathanielbenjamin.com) created this “behind the scenes” mural for Vesta Coffee Roasters as a tribute to the migrant workers who reap the fruits of coffee around the world. “The work of many human hands helps make the thing many of us depend on to face the world,” he wrote on his Instagram page.

There’s a party going on. French artist Pwoz (pwoz.art)—he pronounces it proze– is a resident of Las Vegas via Saint Martin, Tahiti, Montreal and Amsterdam, and that worldliness really shows in this Arts District mural, in which people of all shapes and skin tones simply stand up and celebrate their lives. To look at this wall is to wish you could jump in and have fun. joy of livingIn effect.

Most of the valley murals conform to a landscape orientation; it’s just the kind of walls we have. But “The Sleeping Knight”, created by the Polish muralist Bezt (bezt.org), is a true portrait, both in its orientation and in the photographic way it captures a moment in time. Does the boy dream of slaying dragons or is he just bored with the sermon? Either way, this 2016 piece is easily one of the most striking murals ever to come out of Life Is Beautiful’s street art program.

FROM THE TOP: THE RAINBOW HOTEL & CASINO • THE SILENCIEUX BOUTIQUE • 318 WATER STREET