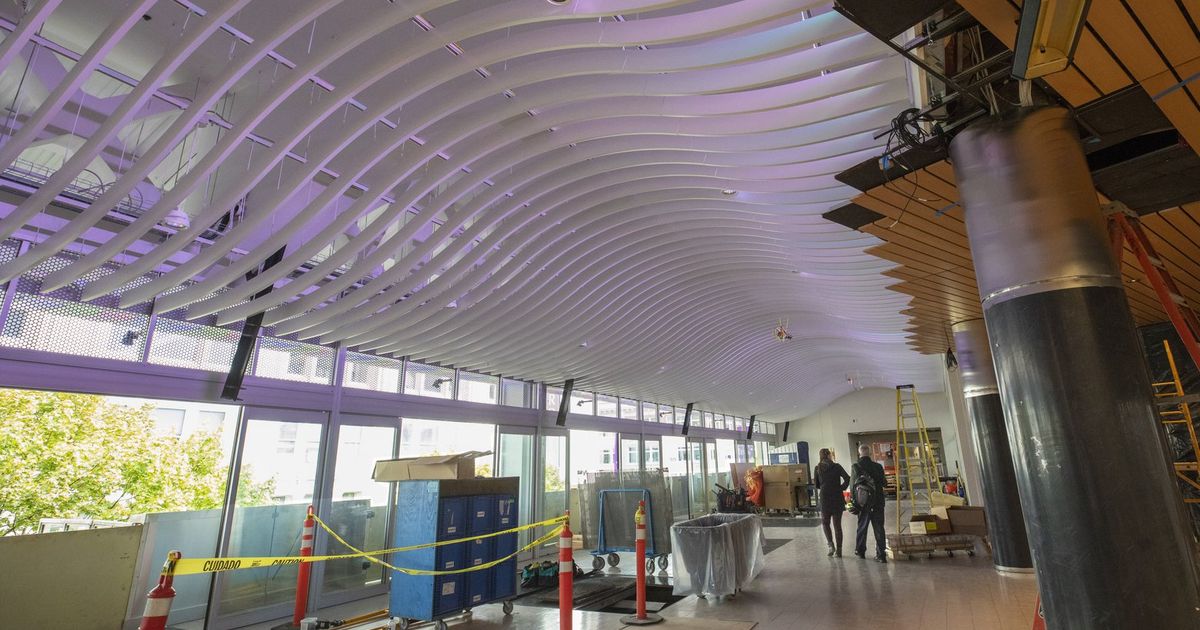 A new world of light and sound awaits travelers who visit the Seattle Center by monorail this fall. Passengers will wave e-tickets in front of a monorail-shaped fare gate to reach the Westlake Center’s third floor, where a corrugated ceiling lights up in sky blue or fire truck red, matching the color of the oncoming train. An aerial video display will show the Seattle Kraken hockey team practicing slap shots. Within seconds, crowds can rush onto the 1962 trains as they head north to the Climate Pledge Arena, home to the Kraken.

The transformed downtown monorail station is where the fan experience begins, say the architects behind the $6.6 million privately funded expansion.

“You’re not just in a waiting area or a holding area. Before, it felt like being in a corral waiting to experience it,” said Emily Perchlik, Project Manager, Senior Partner at VIA Architecture. “It starts your experience when you walk through the fare gate.”

The more spacious station allows the monorail to carry up to 3,000 people per hour during events, according to operations officials. The ticket booth was ripped out and the guardrails removed so that passengers could walk to all doors of the train, instead of just four doors as before.

Monorail service resumes Monday after a month-long construction shutdown. For the first week, opening hours are from 11 a.m. to 7 p.m. Then, beginning October 18, the schedule returns to normal hours of 8:30 a.m. to 9 p.m., or later to service arena events, using the red and blue trains. Masks are mandatory.

The arena’s first big event is a benefit concert on October 19 with Foo Fighters and Death Cab for Cutie, followed by the grand opening with Coldplay on October 22 and the Kraken’s home opener on October 23 against the Vancouver Canucks.

NHL fans, as well as WNBA Seattle Storm spectators and fans, are encouraged take a light rail to Westlake subway station, then walk up the mall via escalators to the monorail concourse. Downtown car parks and bus stops are nearby.

An environmental study predicted that only 5% to 15% of the approximately 20,000 hockey fans are should arrive by public transport, of which only 697 by monorail. Rob Johnson, the arena’s transportation manager, hopes to increase that share.

He was among tens of thousands of people who tried out Sound Transit’s Line 1 extension last weekend, filling trains to standing room only between new U District, Roosevelt and Northgate stations.

“It gives us a lot of confidence that, yes, people are going to choose the light rail/monorail option,” Johnson said. Light rail to Lynnwood, Redmond and Federal Way in 2024 will extend transit reach late into the night.

Trips will take place every five minutes carrying a potential of 250 passengers, or 3,000 per hour, each way. But monorail operators have run tests every four minutes or faster, which can allow more passengers to be transported each hour, Johnson said.

It could take a few weeks for all the electronics to be completed, but tariff gates and staff will be ready for the start of hockey, officials say.

“We’re not going to be able to roll out all the bells and whistles right away, but people are going to be able to enjoy the service on opening night. Westlake is going to be phenomenally better than anything you’ve ever had. seen,” said Tom Albro, co-owner of operating company Seattle Monorail Services.

The Seattle Center Monorail The station will be equipped “within a few months” with gates, video screens, colored lighting and directional signs, spokeswoman Deborah Daoust said.

Four ticket machines and six fare gates are inside the mall, with one ticket machine and three gates on the north side from where people enter Fifth Avenue via an urban stairway or elevator.

Only one elevator is available from the north entrance of the Sound Transit station. There’s no clear alternative if that fails, though Albro said the city has beefed up elevator parts this year.

Machines sell paper tickets for cash or credit and debit cards, but there is no one selling tickets anymore, only a concierge. Electronic fare collection allows more people to board a train faster, so trains can depart more often.

Kraken fans receive a free ride included in a phone app with their event ticket. Otherwise, the monorail fare remains $3 per ride for a standard adult ride. If someone has ever used an ORCA fare card to arrive by bus or light rail, that payment applies to the monorail leg of a trip, so people transfer at no additional or minimal charge.

The ticket-reading entrance doors will soon be decked out in an art-deco metal facade that resembles the nose of a 59-year-old Alweg monorail.