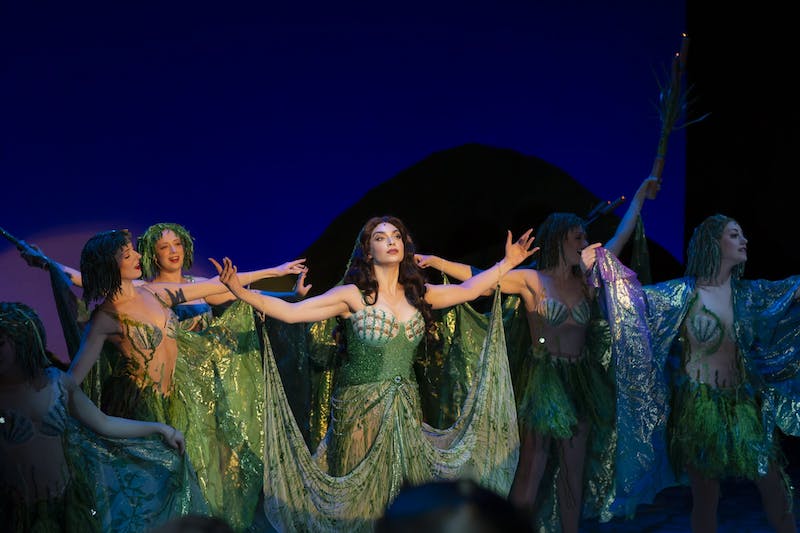 The White River Junction-based theater company has featured Dartmouth students and faculty on and off stage.

From April 13 to May 15, Northern Stage Theater Company presents “Monty Python’s Spamalot” – a musical adapted from the beloved film “Monty Python and the Holy Grail” – as part of its 2021-2022 season. The tale is a parody of King Arthur’s quest to find the Holy Grail, with nods to the history of musical theater and feel-good ballads. In the play, King Arthur and his knights are sent on a mission by the elusive Lady of the Lake to first find the Holy Grail and then put on a Broadway show.

“Spamalot” is one of the silliest shows in musical theatre, bringing the humorous energy of Monty Python to the stage. The setting changes often, ranging from the castles of France to the reimagined Camelot in Las Vegas.

“This spectacular and very silly show is more than just eye-catching – it’s a Valentine’s Day for all that we love about musical theatre,” Dunne wrote in a statement from the show’s schedule. “We’ve got tap dancers for you, ninjas, love songs and nods to musical theater history.”

Nugent, who performs on the show with professionals as part of her “e-term” experiential learning program, plays multiple characters in the ensemble.

“My roles range from monk to knight of Ni,” Nugent said. “Because of this, I have quite a few quick changes, which means I have to get creative. If you see a group of religious monks walking around with Bibles in their hands, know that at least one of them wears a full Camelot Turret Girl outfit underneath.

Constant location changes are one of the driving factors in lighting design decisions. Kotlowitz pointed out that the lighting makes the scenery changes between Camelot and Finland clear to the audience.

“You’re in the middle of a King Arthur play, and then all of a sudden they burst into Fiddler on the Roof,” Kotlowitz said. “The lighting kind of helps make those transitions visual. There are times when suddenly you’re in a disco, and playing with these different styles has been rewarding.

While “Spamalot” is a silly show by nature, Northern Stage’s professional setting demands seriousness and decorum when performing with the cast. Both Nugent and Serpas reflected on the professionalism of their e-term experience.

“This is my first full in-person production since the pandemic began,” Serpas said. “Also, it was really cool to work alongside professional actors and get a glimpse of how people make their careers out of it.”

Nugent clarified that the unconventional nature of the show helps him grow as an artist.

“Of course, ‘Spamalot’ is a silly show that definitely doesn’t take itself seriously, but I’ve observed that to credibly live in its silliness, I not only have to be comfortable with who I am, but becoming willing to share all of this without fear of judgment or condemnation — no matter how strange or unconventional it may seem by societal standards,” Nugent said.

However, Nugent added that the electronic term has also been physically and mentally challenging, noting that he sometimes felt inadequate when surrounded by such accomplished actors.

“As I watch my beautiful cast mates sing melodiously and dance along on stage, it’s hard not to be amazed,” Nugent said. “But every time I find myself sharing the stage with these professionals, I feel like, well, an impostor. Part of me feels guilty and unworthy to be with them, and I can’t help but feel like I’m ruining scenes we share. Also, I find it hard not to downplay my abilities.

The musical is filled with nods to the musical theater canon: Joseph Stein’s “Fiddler on the Roof,” Stephen Sondheim’s “Company,” and references to famous Broadway divas like Liza Minnelli. In Act 2, the Lady of the Lake, a parody of Guinevere played by Michelle Beth Herman, laments “Whatever happened to me”, playing in the trope of Minnelli, a notorious prima donna. She complains about the “producers” and throws herself enviously into the audience. At one point, the show’s stage managers make an appearance and Herman criticizes them, playing the “difficult” Broadway diva trope.

“One of my favorite parts of the show is how it’s a caricature of theater culture and the canonical works of what we consider American musical theatre,” Kotlowitz said. “I liked that we could kind of poke fun at ourselves that way. It is an erased but joyful work.

The musical attempts to capture the many sub-communities of the theater itself. Songs like “His Name is ‘Lancelot'” and “You Won’t Succeed on Broadway” allude to the theater’s robust LGBTQ+ and Jewish artistic communities, respectively.

“There are a lot of aspects of theater that the show touches on — the people who have historically contributed to it and the general working environment of musical theater,” Kotlowitz said.

While touching on theatrical culture, the performers also made relevant jokes for the people of the Upper Valley. During the show, the cast chose an audience member to find the Holy Grail. King Arthur, played by Jonas Cohen, asked the viewer’s name and said he was one of the “good people in the Upper Valley, next to Bernie Sanders and Ben and Jerry”.

More than anything, the humor of the “Spamalot” performers created an energetic and lively atmosphere. The Northern Stage audience went wild at almost every joke and lighting change.

“It’s impossible to work on ‘Spamalot’ and not have ‘Always Look at the Bright Side of Life’ stuck in your head,” Dunne said, referring to one of the show’s recurring songs. .

With triple-threat performers, the humor of Monty Python, a bit of satire and the intimate space of the Northern Stage theater company, “Spamalot” managed to poke fun at musical theatre, tell the story of the Saint Grail with a touch of Broadway and to bring joy to an audience in the Upper Valley.