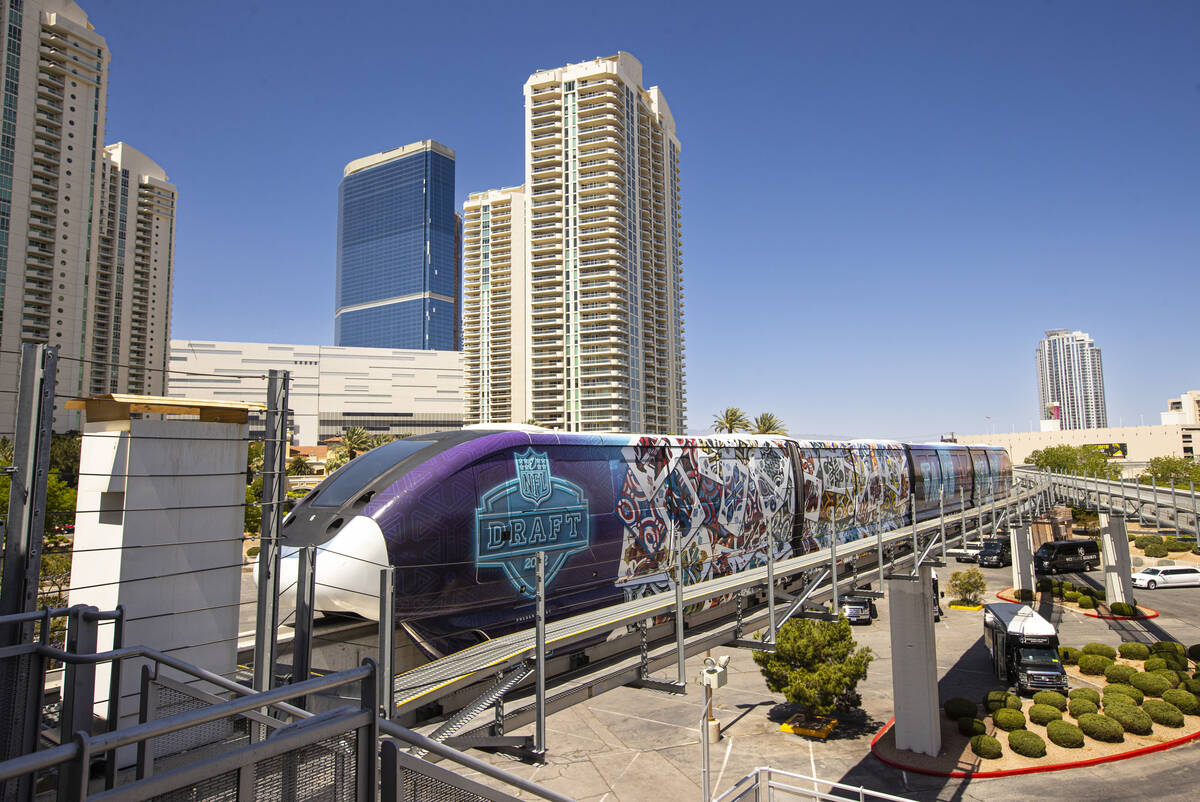 Along the Strip, the Las Vega Monorail ferried hundreds of NFL fans from hotels, free parking at the Las Vegas Convention Center and around the Linq Promenade on Thursday, the first day of the NFL Draft.

Many monorail riders sported the colors of their teams as they hopped on and off the train along the Strip. People wearing matching shirts discussed their team’s possible draft picks and hopes for the upcoming football season.

Officials from the Las Vegas Convention and Visitors Authority, which operate the trolley service, said they expect many drafts to use the monorail over the next two days.

“Monorail ridership has been strong all day and the system has handled demand very well,” Lori Nelson-Kraft, LVCVA’s senior vice president of communications, said Thursday. “The majority of passengers today are locals who took advantage of the free parking at the convention center. We expect the monorail to remain a convenient and popular option for the rest of the draft events.

Hundreds of NFL Draft fans were in for a surprise Thursday when they disembarked from their flights at Harry Reid International Airport.

A party awaited them in the baggage claim area with a DJ spinning music, popcorn and a vendor offering a selection of beers and cocktails to take away. They also had the opportunity to get gifts and take photos against the background of NFL mascots on playing cards, courtesy of the Las Vegas Convention and Visitors Authority.

It was all part of how the airport greets visitors.

Airport officials declined to estimate the number of travelers arriving for the draft because this unique event is unprecedented in southern Nevada. But knowing Reid would be busy, they opted to give visitors a festive experience at the airport.

“We are the first and last sight of Las Vegas for so many of these passengers and we want to provide that world-class feel that they are used to and expect,” said Joe Rajchel, Administrator of the airport public information.

Rajchel also noted that travelers should expect traffic delays to and from the airport due to road closures and should allow extra time before arrival.

Not all travelers were aware of the huge footprint of the NFL Draft in Las Vegas this weekend. Some were in town for more traditional Vegas entertainment: entertainment residencies. Miami resident Maria Crowley traveled with three of her tennis teammates to see Lady Gaga and Michael Bublé.

The group plans to attend draft-related events in town.

“(My friend’s) husband said, ‘Honey, make sure you bring something from the Jets!’ “said Crowley.

Boston resident Michele Poole says she and her best friend were in town for a girls’ weekend of a three-night stay at Virgin Hotels Las Vegas, thanks to an Instagram sweepstakes she shared. win.

“I’m so happy,” Poole said. “First of all, it didn’t even occur to us that it was draft weekend. We walked in, we were like, ‘Whoa, there are even more hot guys than usual in Vegas. That is why!'”

McKenna Ross is a corps member of Report for America, a national service program that places reporters in local newsrooms. Contact her at [email protected] Follow @mckenna_ross_ on Twitter.