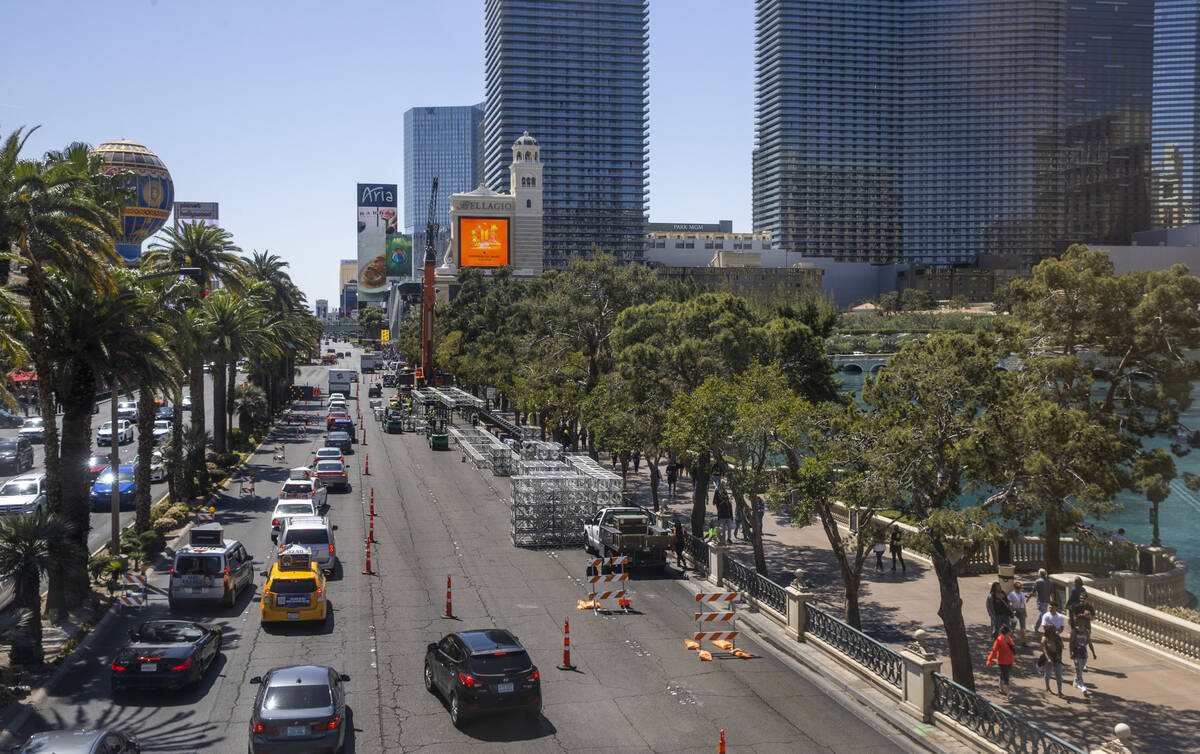 Las Vegas Strip closures should be welcomed by locals

Motorists began to feel the impacts last week from construction related to the hosting of the NFL Draft in Las Vegas. Instead of complaining about it, they should welcome it.

Lane closures in front of the Bellagio were put in place on Wednesday to begin building the stage for the “floating” red carpet above the Bellagio fountains. The much-talked-about aspect of the project results in lane closures in the area until May 6.

These three weeks of limited impacts on the lanes are a small boon from the public to be able to organize major events on the Las Vegas Strip. When the draft takes place April 28-30, the Strip from Bellagio Lane to the intersection of Flamingo Road will be completely closed to traffic. Flamingo from the Strip East at Koval Lane will also be closed.

The closure of portions of Las Vegas Boulevard is nothing new, and officials in the area have become quite good at carrying out such plans.

Each year, much of the Strip is closed to host “America’s Party”, better known as New Year’s Eve. Hundreds of thousands of people flood the Strip, party, then crews clean up and reopen the Strip at the first sunrise every January 1st.

Officials coordinate the shutdown for several hours each year and coordinate with public transportation to ensure those taking Regional Transportation Commission buses are still able to navigate the city.

The Las Vegas Monorail has one of its most useful days on New Year’s Eve, as it’s the only mode of public transportation operating along the Strip during the road closure. The monorail will also be an important part of the draft NFL transportation plan. Locals can park for free at the Las Vegas Convention Center and take a discounted ride on the monorail to get downtown. Oh, and attending the Draft and Draft Experience is also free.

Any locals planning to attend the draft should take advantage of the offer from the Las Vegas Convention and Visitors Authority.

Runners also take to the boulevard to walk under the lights each year for the Rock ‘n’ Roll Marathon. The related Strip closure extends to downtown, and yet people manage to go about their daily lives with some slight complaints on social media.

Another event is set to take place at night on the Strip next year when Formula 1 hosts the Las Vegas Grand Prix.

For three evenings in November, the Strip between Spring Mountain Road and Harmon Avenue will close for up to seven hours a night while runners train, qualify and race. These drivers will reach speeds of over 212 mph, making area residents who regularly go over 100 mph on the 215 Beltway look like Sunday drivers.

Of course, these events are not allowed to take place and disrupt traffic just for the show themselves. There is money at stake, a lot of money.

The 2019 NFL Draft in Nashville, Tennessee saw more than 600,000 people attend over three days, generating an economic impact for that city of $224 million. If projections by NFL and regional tourism officials are correct, the Las Vegas version will be even bigger, so hundreds of millions of dollars could be dumped into the Las Vegas economy this long weekend.

F1 event is faster and expected to generate more money, with Governor Steve Sisolak expecting 170,000 people to travel to Las Vegas to compete in one of only three F1 races in the US .

These participants will accumulate 400,000 nights during these three to four days, bringing in more than a billion dollars in indirect economic benefits.

So while there are major impacts on the Strip associated with the big events that Las Vegas has grown accustomed to hosting, they are worth the few days a year of impacts that hospitality industry employees and tourists must endure.