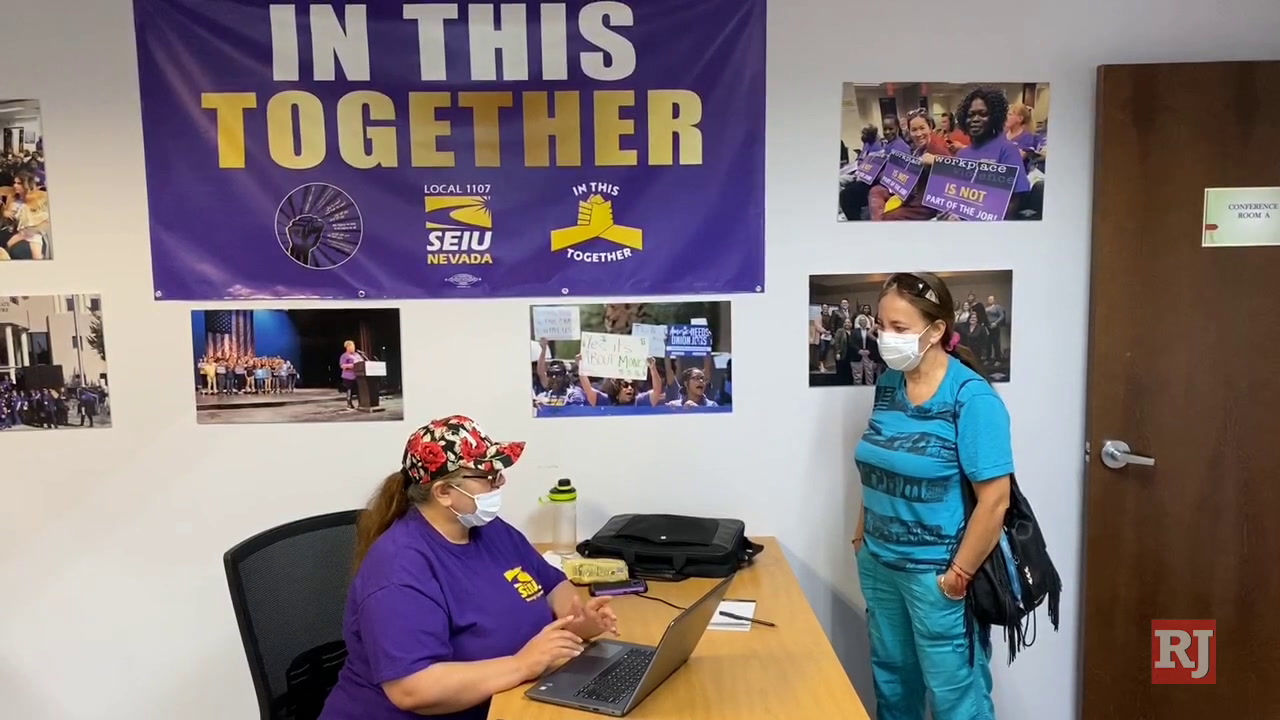 Service Employees International Union, Local 1107 board member Jody Domineck, said it was “totally unacceptable” for the Nevada Occupational Safety and Health Administration not to perform workplace inspections for none of the more than two dozen complaints against hospitals since the state’s coronavirus outbreak began in early March.

â€œTheir reluctance to even step foot in the building they know we are being asked to do things that are not safe,â€ said Domineck, RN at Sunrise Hospital and Medical Center in Las Vegas. “I think it’s absolutely them who are turning their backs on us.”

Nevada hospitals have faced 26 complaints in the past seven weeks, more than OSHA typically receives in an entire year. It is likely that more are on the way.

SEIU Local 1107 is preparing to “lay many charges with OSHA,” union executive director Grace Vergara-Macta said at a press conference on Tuesday. She could not be reached for further comment.

As of April 16, more than 130 health workers in Clark County have contracted the coronavirus, according to the Southern Nevada Health District.

Most of the complaints relate to Clark County’s short-term acute care hospitals, the first line to treat patients most seriously ill with the coronavirus. Most of the nine complaints closed and made public alleged inadequate access to protective equipment.

But instead of conducting on-site inspections to determine the validity of complaints against hospitals and other companies, OSHA resolves them through written inquiries to protect the health and safety of its 14 investigators, wrote. agency spokesperson Teri Williams in an email.

On some sites, such as construction projects, investigators look for violations from their vehicles or without physically entering the sites. For hospitals, complaints are deemed resolved once administrators have shown that policies are in place to deal with suspected workplace hazards.

Governor Steve Sisolak told a Tuesday afternoon press conference that OSHA, like other state agencies, had been strained by the pandemic. He said he believed OSHA carried out workplace inspections, but his office would look into the union’s complaint.

â€œIf they haven’t completed one, we’ll check with OSHA and see exactly what happened,â€ Sisolak said.

As of Tuesday afternoon, OSHA had received 524 complaints in March and April. More than 370 were linked to the coronavirus, Williams wrote. By comparison, the agency only received 231 complaints during the months of March and April of last year.

Complaints related to the coronavirus have often involved shortages of protective equipment, alleged unenforced social distancing requirements, and disputes over whether an occupation should be considered essential, Williams wrote.

â€œThe increase in complaints is directly linked to fear and concern for personal health and safety as well as fear of transmitting the virus to members of the household with underlying conditions,â€ he said. -she writes.

A global shortage of protective equipment has led many US hospitals to change the way they distribute their limited inventory.

While the changes in the guidelines came on the recommendation of the Centers for Disease Control and Prevention, some Nevada hospital workers say they have been instructed to go even further.

In late March, an employee at Carson City’s largest hospital filed a complaint with OSHA saying his employer was “severely under-supplied with personal protective equipment” for the coronavirus outbreak.

Workers at the Carson Tahoe Regional Medical Center have been urged to reuse masks and gowns while seeing multiple patients, according to the complaint. In some cases, workers were denied all protective equipment.

â€œSomeone has to be held accountable,â€ the employee wrote. “The administration has proven to be ill (equipped) to provide its employees with standard protective equipment.”

A second complaint was filed against the hospital a few days later. He alleged that nurses were supposed to reuse single-use protective equipment or received none at all.

OSHA records show that both cases were closed after hospital administrators sent investigators a letter saying they could not verify that a staff member had been denied medical equipment. protection. They also included a copy of the hospital’s written policy allowing “limited reuse” of protective equipment during the shortage caused by the pandemic.

In an email to the Las Vegas Review-Journal on Tuesday, hospital spokesperson Diane Rush wrote that all caregivers at Carson Tahoe Regional have had access to protective gear, even during efforts to conservation of stocks.

â€œWe believe that our proactive actions have ensured a safe working environment for our staff,â€ Rush wrote. â€œIf we keep our staff safe, they will be available to keep our community safe if COVID-19 hospitalizations continue to increase. “

The health district’s determination that more than 130 Clark County health workers have contracted the coronavirus is almost certainly an undercount.

Medical investigators have been unable to investigate many of the more than 3,000 county residents infected with the disease.

Figures from health districts do not distinguish whether those infected are workers at local hospitals or offices of private providers. However, some local hospital systems acknowledged that members of their staff had been infected.

University Medical Center spokeswoman Danita Cohen said about 25 employees are or have been infected. At least two are nurses, the workers’ union revealed this month.

An OSHA complaint was filed against UMC on March 23. The case remains under investigation and therefore private.

HCA Healthcare spokesman Antonio Castelan said an unspecified number of workers at its local hospitals have contracted the coronavirus, including “some who have fully recovered”.

A nurse at HCA’s MountainView Hospital contracted the virus in March while treating patients. She received several weeks of intensive care at another local hospital before recovering and being discharged last week.

News from Las Vegas: Social distancing could continue until 2021 in Nevada