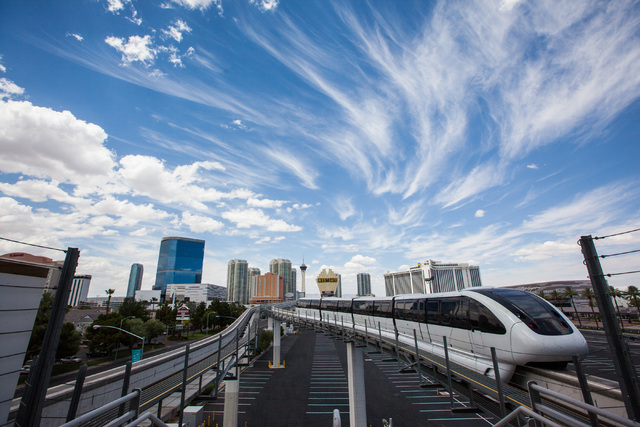 Myles said his nonprofit cannot secure funding for the 1.14-mile extension of MGM Grand to Mandalay Bay unless the county commits to giving the monorail company up to $4.5 million per year for the next 30 years.

“We are at a point where we need to know if we will be able to fund this project before we continue to spend money,” he told the commissioners.

The money would not be used for construction, Myles said. Rather, it would be available for monorail maintenance and act as a credit enhancement so the company could obtain low-interest bonds for expansion.

“The project is only possible if we have the county’s commitment,” Myles said.

“Essentially, I feel like the $4.5 million is a line of credit that we keep there for 30 years in case you need it,” Commissioner Marilyn Kirkpatrick said. “I have never seen such creative financing.”

The money would come from tax revenue from hotel rooms typically reserved for special projects on the Strip. Commissioner Chris Giunchigliani said she disagreed.

“I’m not going to go to a revolving fund or a line of credit or whatever it’s called. In my mind, it just doesn’t make sense,” she said.

Myles did not reveal how much money the monorail company has spent on the expansion project. The monorail company did not immediately provide the number when asked by the Review-Journal on Tuesday, and commission chairman Steve Sisolak said the information was not given to the commission.

Commissioners also expressed concern about whether the monorail company’s revenue will be enough to pay its debt and construction and operating costs.

The company is waiting to complete a ridership study containing revenue projections, and while it hasn’t put a price on the expansion project, an estimate of $100 million has been suggested.

“How to commit to the future without all the details?” Kirkpatrick asked after the meeting.

Ridership has been a problem for the monorail.

In January 2010, the monorail company filed for bankruptcy after revenue was not enough to repay $650 million in loans to build the existing 3.9-mile transit system. The company emerged from bankruptcy proceedings in 2012.

The route of the proposed extension blocked the project and remains in question.

The original construction proposal was on a path that could damage or block a vital water main for the strip, so the commissioners sent the plan back to the drawing board.

Myles said the route was redesigned and approved by the Southern Nevada Water Authority. McCarran International Airport must now agree to the revision because the new route would take the monorail into the parking lot of companies leasing airport land along the south side of Reno Avenue.

Airport spokesman Chris Jones said his department would meet with the monorail company on Wednesday to discuss the proposed route.

“It is too early to tell what our assessment will reveal,” Jones wrote in an email to the Review-Journal. “The information shared so far was very general in nature, really conceptual, and didn’t provide the level of detail we’ll need to really look at feasibility.”

Commission Chairman Steve Sisolak said at the end of the discussion that the monorail extension was going in the wrong direction.

“I don’t want it to be implied that you have my support going forward because that’s not the case right now,” he said. “There are a lot of unanswered questions.”