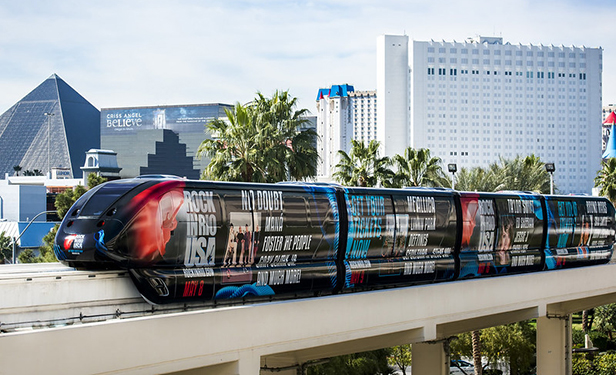 Getting from your hotel to the Las Vegas Convention Center and back has become much easier and cheaper for some exhibitors and trade show attendees. For the second time, the Las Vegas Monorail offers unlimited journeys for CONEXPO-CON / AGG and IFPE trade fair participants via 3-day participant and 7-day exhibitor passes integrated into each trade show badge. The triennial event will take place from March 10 to 14.

This added value not only makes the use of the rail system more convenient for busy delegates, who simply scan their badges and leave without having to queue at ticket kiosks or fumble with payment cards, it also allows them to ‘Avoid the congested roads around the Las Vegas Strip. .

According to officials of the Las Vegas monorail, During the last CONEXPO / CON-AGG held in Las Vegas (in 2017), the number of monorail riders increased by 30% compared to the previous event, thanks to the integration of badge prices. This year’s show, which is expected to attract nearly 130,000 attendees, will take place at two stops along the monorail route: the Las Vegas Festival Grounds, accessible from the SAHARA Las Vegas station, and the LVCC.

â€œThree years ago, our partners at CONEXPO-CON / AGG immediately understood how an integrated monorail ticket improved convenience and access. [â€”] more people than ever have used our system, â€said Ingrid Reisman, vice president and marketing manager for the Las Vegas monorail. â€œThis year, with two lounge venues linked by monorail stations, we look forward to being able to offer even more convenience and connectivity. “

From the Las Vegas monorail launched its badge pricing integration system In spring 2017, more and more convention groups are choosing to offer it to their attendees and exhibitors, added Reisman. Other major trade shows held at LVCC that have incorporated the monorail fare into show badges include the National Association of Home Builders International Builders Show and the National Association of Broadcasters’ NAB Show.

According to Reisman, the Las Vegas Monorail is working with planners to arrange ticket links directly to an event’s registration site, with unlimited multi-day passes available in 3, 4, 5, and 7 increments. days.

In addition, any passenger with a smartphone can access mobile ticketing, which is now available to Android users via Google Pay using the NFC technology built into Android phones. Apple iPhone users can also deposit their e-tickets into their Apple wallet using the monorail’s scan-and-go technology.

When the new 500,000 square foot CAESARS FORUM conference and event center, located at Harrah’s / The LINQ station, opens on March 18, the monorail will have three large convention facilities and one large festival destination in the middle of air along its route: CAESARS FORUM, the Las Vegas Convention Center, the Las Vegas Festival Grounds and the MGM Grand Conference Center.

â€œThis pricing integration option is taking off among convention and trade show planners,â€ said Reisman. â€œThis is a victory for the planners, who are happy to be able to offer their participants [and exhibitors] a useful convenience.