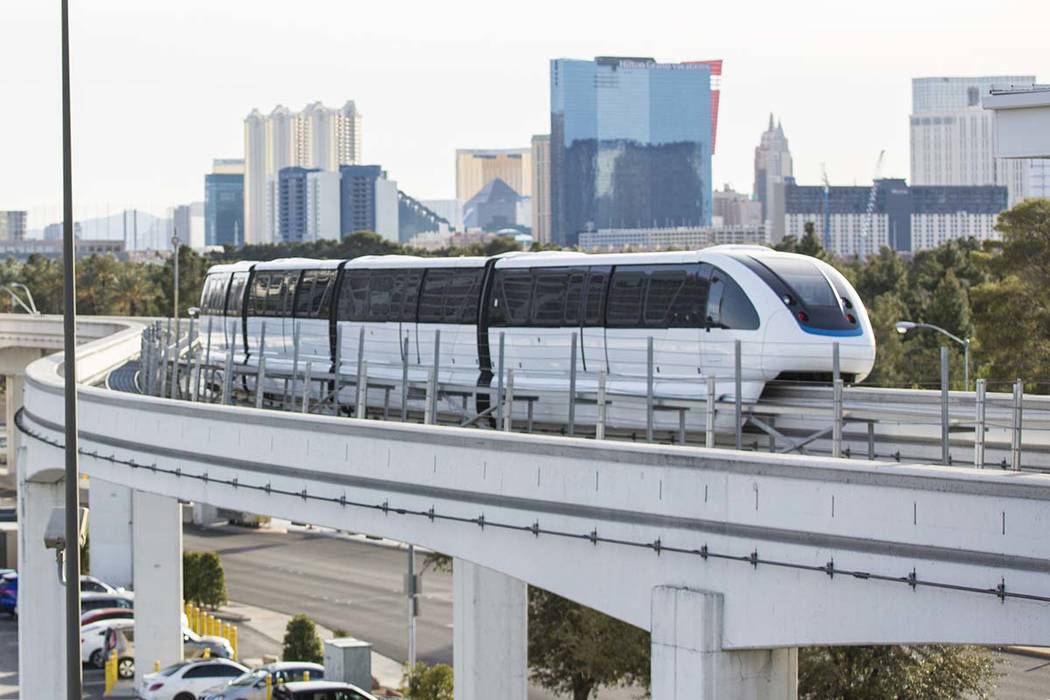 The Las Vegas Monorail Co. essentially asked Clark County commissioners on Tuesday to ensure that a public contribution of up to $135 million would be available to the company if needed for a pair of system expansions.

Additionally, the company said the projected cost of the extensions and the two planned stations had risen to $172 million, an increase of $62 million from the original estimate.

Extending the monorail to Mandalay Bay and building a new station in the commercial area would cost $140 million, according to figures provided to the county. A proposed station at the MSG Sphere at The Venetian that would serve the nearby Sands Expo and Convention Center and The Venetian and Palazzo properties via a pedestrian walkway would cost around $32 million.

Las Vegas Monorail Co. President Curtis Myles said the public contribution of $135 million would be used if needed. The money is said to come from a 2017 agreement with the county that provided $4.5 million in hotel room tax revenue to be available annually to Monorail Co. in the event of an emergency.

The agreement contains a clause stating that the county can cancel the agreement at any time and that no money is guaranteed to be distributed to the monorail in any given year.

This agreement should be reworked to ensure that the $4.5 million per year would be available for 30 years if needed and to remove the county’s ability to cancel the agreement at any time to appease potential lenders for the projects. of monorail.

Commissioner Larry Brown noted that this would be the first time the county has considered this type of investment with a private company.

This guarantee is much needed as Myles said the company is now seeking two different loans, one for the MSG Sphere project and the other for the Mandalay Bay expansion, instead of one large loan for both.

“Discussions with lenders and the market for this type of project are relatively tight for funding,” Myles said. “These lenders have suggested that we stagger the financing of this one so that we can complete part of the project (MSG Sphere station) in advance, while the rest of the project (Mandalay Bay) is developed and we fulfill our obligation. at the airport.”

The funding in question for the MSG Sphere station depends on the progress of the entire project, Myles said. The lender provided the company with an aggressive timeline for its finances to be aligned by the end of May, but said it believed it was more realistic to expect early June.

County Attorney Mary Ann Miller said she was concerned about the requested change in language, which removed any air of optimism from the meeting.

“What the monorail company is asking you to do is change that completely and make it a requirement…and the only reason you’re doing that is because you’ve been presented with lenders requiring it. “said Miller. “So under contract law they would be considered third party beneficiaries of this contract.”

Miller feared that if the Monorail Co. went bankrupt again, the lenders might somehow rely on the county financially.

Myles insisted that the company’s projections show the only instance the monorail would seek a $4.5 million payment would be to secure the original loan from the lenders.

Myles also said the financial support he expects from resorts is factored into lenders’ decision to lend the monorail financing.

“Based on the conversations we’ve had to date, I’m very confident that we will get the[resorts’]participation needed to secure the loan,” he said. “Today I feel the support would come in the form of debt investment.”

The Monorail Co. faced financial instability for much of its existence.

After filing for bankruptcy in 2010, the company’s debt was reduced from $650 million to $13 million.

The Monorail Co. is on the hook for a payment of $10 million in principal plus interest in July, and Monorail spokeswoman Ingrid Reisman said there is no reason to believe that would not happen.

“We paid off all our debts, I don’t see why it would be any different,” she said.

She declined to comment on whether the request to get the guaranteed $4.5 million per year would be detrimental to the company paying that debt.

Reisman also denied a request from the Review-Journal for updated ridership figures, and Miller said the county had not received updated numbers either.

The Monorail Co. and the commissioners are expected to discuss the $4.5 million a year issue over the next few weeks, and it will be heard from again at an upcoming board meeting.

Despite this, Miller cautioned board members against changing the 2017 agreement and the possible ramifications.

“We’re not in the finance company business,” Miller said. “There are hurdles to jump through if you want to get rid of the cancellation policy or try to get around the budget appropriations laws. There are legal issues that do everything they asked for.