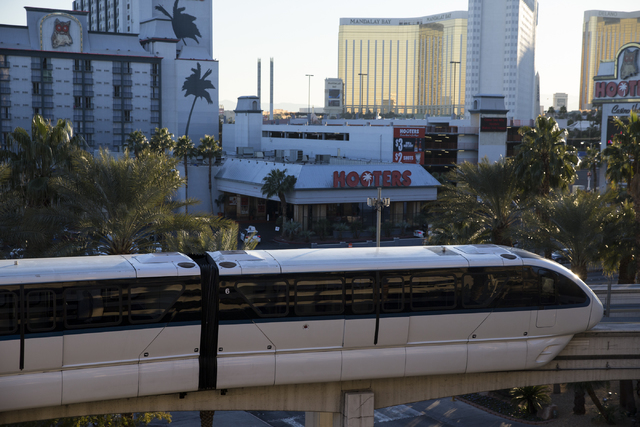 Las Vegas Monorail Company poised for another spurt of expansion

Clark County may soon allow the Las Vegas Monorail Company to expand its route along the Strip.

After a hiatus of nearly nine months, the monorail company is due to appear before county commissioners on Wednesday to apply for land use permits for a 1-mile extension south of MGM Grand to the resorts of Luxor and Mandalay Bay.

The monorail company will also ask the commission for permission to continue to dip into a long-standing escrow account to pay for design and engineering costs while financing is secured for the more than $100 million project.

Monorail spokeswoman Ingrid Reisman said the company would not give any interviews about the project until Wednesday’s meeting.

Discussions about extending the monorail to connect convention centers along the Strip have been ongoing for nearly two years.

The project’s urgency was renewed after planners said the monorail could be a public transportation option for pedestrians traveling to an NFL stadium under construction west of Mandalay Bay. In July, the monorail company paid $2.5 million for a 35-unit apartment complex on 0.9 acres of land at 93 E. Reno Ave., which is expected to be on the new route of the monorail.

But the project was delayed as the monorail company revised the new route.

The route proposed a year ago had to be changed because it risked damaging or blocking a vital water main for the Strip. The Southern Nevada Water Authority is on board with the new route, agency spokesman Bronson Mack said.

The new route would place support footings on McCarran International Airport property along the south side of Reno Avenue that is leased to Atlantic Aviation and Ribeiro Companies.

Airport spokesman Chris Jones said the monorail company must reach agreements with those companies and receive approval for its plans from the Federal Aviation Administration before the extension can be built.

“Any approval next week would be conditional on the issues being resolved, and it is currently a work in progress,” Jones wrote in an email.

Atlantic Aviation and The Ribeiro Companies did not return the Review-Journal’s request for comment on Thursday, but Reisman wrote in the email that the monorail company is working with both companies and the FAA.

It’s unclear how the monorail extension will be funded, but the company plans to pay for costs leading up to construction by borrowing money from a “doomsday account” to pay for the demolition of the monorail should it ever be removed. .

The account was created in 2000 with $6 million. In May 2016, the county authorized the monorail company to begin withdrawing interest income from the account to pay for the design and engineering of a route expansion. This agreement expired in March.

Any money withdrawn earns interest at the rate of 4% per annum. If funding for the expansion doesn’t close by July, the proposed deal says the monorail company will begin making monthly repayments of $16,666.

The monorail company is also asking the commissioners to sign a resolution that would allow the company to ask the county for up to $4.5 million a year in excess tax revenue from resort corridor rooms to pay for maintenance of the monorail track if no other money is available.

“It’s at the absolute discretion of (the county commission) to say yes or no,” Colvin said.