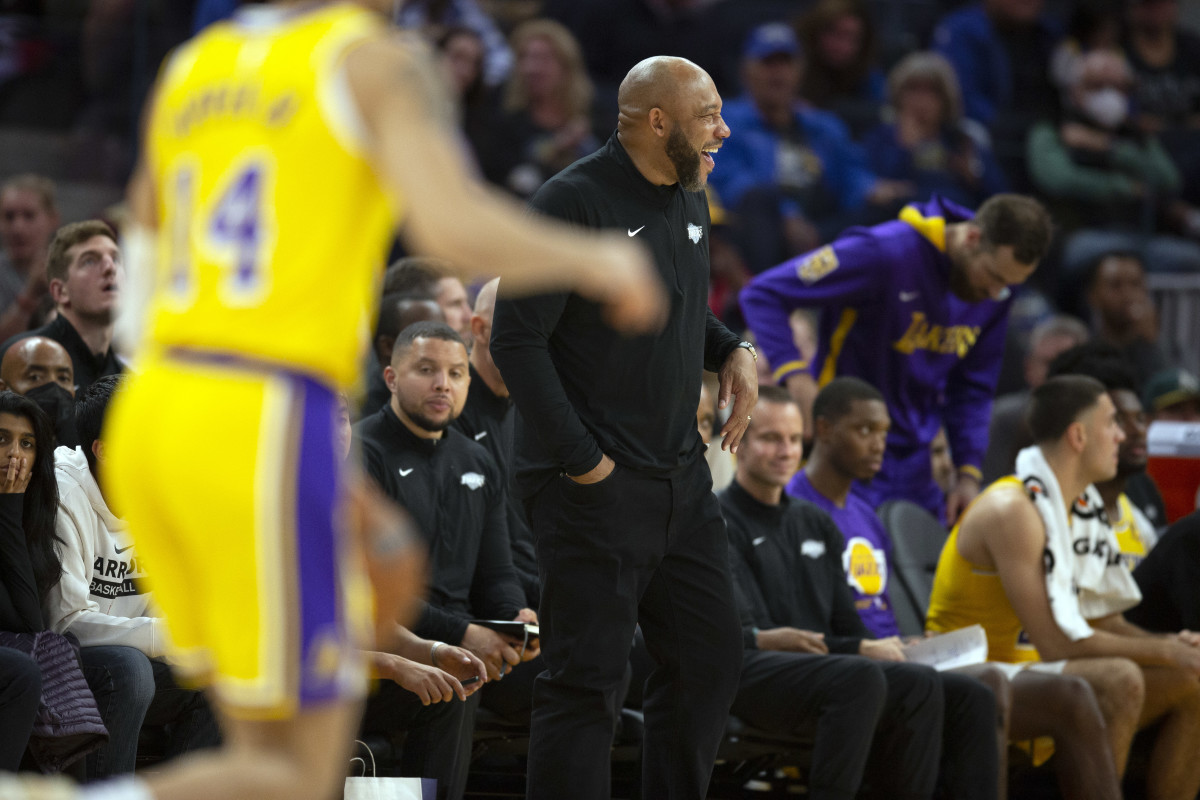 With Los Angeles Lakers role players Dennis Schroder (finger) and Troy Brown Jr. (back) permanently sidelined for the team’s regular season opener on Tuesday with injuries, the possible starter Russell Westbrook day-to-day with a sore hamstring, plus Lonnie Walker Jr. and Anthony Davis about to run out of time, the starting lineup LA trots out against the Warriors might not even be the top five ideals of the league. head coach Darvin Ham.

Ham told reporters today that he would “probably” let them know his starting lineup for opening night on Monday, according to Mike Trudell of Spectrum SportsNet.

The Lakers’ first-season head coach experimented with six different starting lineups during the team’s 1-5 preseason. The most recent starting five did not include big man Anthony Davis, who will absolutely start now that he has been given the green light to do so. But even then, will Davis start at four or five?

We can definitely throw in one of the team’s starting lineups: a starting five made up of rookie point guard Scotty Pippen Jr., sophomore shooting guard Austin Reaves, second-round rookie and small forward Max Christie, forward Wenyen Gabriel, and center Thomas Bryant. The only reason these five were used so generously is because this Lakers team faced the Minnesota Timberwolves in Las Vegas on the second night in a row. The reason the NBA mandates back-to-back games in its preseason goes beyond this reporter’s pay grade.

For the team’s first preseason game, a blowout 105-75 loss to the Sacramento Kings on Oct. 3, Ham went with a Westbrook starting five at point guard, 6’3″ Kendrick Nunn at shooter , LeBron James at small forward, Davis at power forward and Damian Jones at center.In the next contest, a 119-115 overtime loss to the much better Phoenix Suns, Davis sat with a tightness in the lower back. Ham responded by moving LeBron James up from a power forward position, and starting the 6’9″ Gabriel at center. Ham also elevated Patrick Beverley and Austin Reaves along the wing, while keeping Westbrook the starter at point guard.

In LA’s fourth game (as we mentioned before, we’ll be skipping the October 6 Timberwolves preseason contest, which was scrapped before it even started), an October 9 win over the Golden State Warriors, Davis returned to the lineup, while James and Westbrook rested. Ham started Davis in the middle, kept Reaves in the starting lineup but moved him down to point guard (he’s a solid passer) and launched a newly healthy Lonnie Walker IV to the shooting position . Ham pitched Christie at small forward and Juan Toscano-Anderson at power forward.

Davis’ back apparently broke again and he had to sit out for the team’s preseason finale, a 133-86 demolition at the hands of the young Kings. Ham demoted Westbrook to a bench role and pretended it wasn’t a demotion (it definitely was), while moving Beverley to point guard and bringing in Reaves to start shooting. It is unclear if the injured Lonnie Walker IV would have started at two during this game. Christie started at small forward, James played power forward and Damian Jones made his second start at center.

This writer will attempt to guess the team’s starting five on opening night. I predict Ham will start a new seventh starting line-up in as many games (including the aforementioned pre-season): Patrick Beverley at point guard (although he had a tough night on Friday), Lonnie Walker IV at shooter, Austin Reaves at small forward, LeBron James at the forefront and Anthony Davis at center.

Come back tomorrow to see how wrong I am!