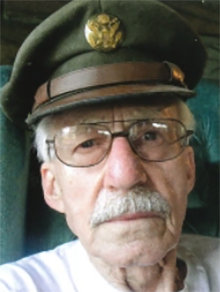 Warren – John William Novak, 99, passed away on Friday evening, December 3, 2021 at Continuing Healthcare at the Ridge.
John was born on May 16, 1922 in Youngstown, OH, the son of the late Joseph and Mary Novak.
He was a proud veteran of the United States Army Air Corp as a military police force during World War II. He served in the Battle of Dutch Harbor in the Aleutian Islands. While on the islands he kept German prisoners, then served on Langley Island and was honorably freed in 1945.
He was a member of Christ Episcopal Church in Warren and worked for Grinnell Corp for 15 years until his retirement in 1974. In 1975 he became a cancer survivor. He also volunteered at Salem Hospital, bringing candy to patients and caring for family members.

He enjoyed being outdoors and spending time in the sun, whether he was hunting, fishing or at his home in Pennsylvania. Every winter he traveled to visit his sister Beea in Simi Valley, California; sister-in-law, Helen Munz; Laughlin, NV; Aunt Helen in Santa Susana, California; and Vegas.
John will be sadly missed by his son, Alford L. Novak; stepdaughter, Sue Moore; 26 great-great-great-grandchildren and great-great-grandchildren.
Besides his parents, he was predeceased by his beloved wife, Frances Novak, whom he married on March 1, 1948 and died on December 27, 1968; his 35-year-old partner, Betty Lesek; daughters, Virginia Lee Scarpaci and Wanda Carlitto; sons-in-law, John and Tommy Lesek; brothers, Joseph and Edward Novak; and her sisters, Frances Bartholomew and Beatrice Burbach.

A private service will be held and the cremation has been entrusted to Lane Family Funeral Homes Roberts Clark Chapel in Warren.
Memorial contributions can be made to St. Jude Hospital in memory of John.
Family and friends can send their deepest condolences by visiting www.lanefuneralhomes.com