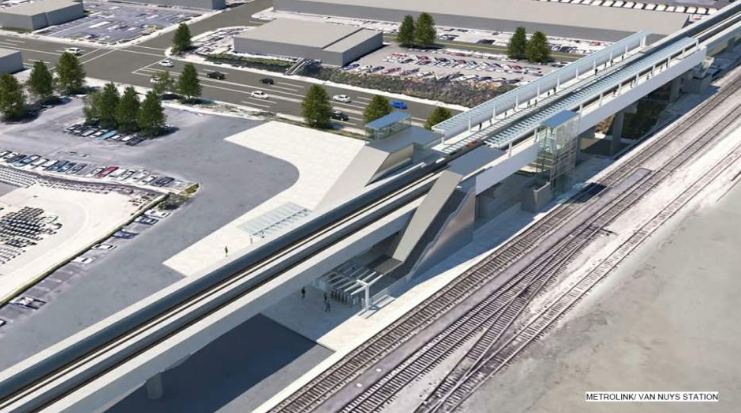 Heavy rail or monorail? LA Metro has a big decision to make for Sepulveda Transit Corridor

The heavy rail line version would be about 14.5 miles and cost $10.8 billion.

Will the Sepulveda Transit Corridor project be heavy on the minds of LA Metro Board members, or will it be a monorail?

Officials will weigh two options for the project: a heavy rail line or a monorail that will run along the I-405 freeway between the San Fernando Valley and the Westside. LA Skyrail Express offers the monorail, while Sepulveda Transit Corridor Partners – Bechtel offers the heavy rail option.

The monorail line would run along the existing right-of-way in I-405 and rail corridors. The route would be 15 miles long and the trains could reach speeds of 65 mph. The construction cost is estimated at $6.1 billion, with annual maintenance and operating costs set at $44 million.

The LA Skyrail Express proposal also includes an alternative concept that would include an additional 4 miles of track. The idea realizes the complete construction of the Sepulveda Transit Corridor between the Los Angeles Metro Orange Line north and Los Angeles International Airport. The second option would cost $7.5 billion.

Sepulveda Transit Corridor Partners – Bechtel opts for heavy rail line similar to existing LA Metro B and D lines. The plan is approximately 14.5 miles long and consists of elevated and underground tracks between the Valley and Westside. The trains would reach speeds of 80 mph, and the project is estimated at $10.8 billion. A single-bore tunnel is also part of the proposal.

Metro is expected to begin the environmental review of the Sepulveda Transit Corridor in the coming months. The selection of the preferred alternative will follow, then the winning team will have the opportunity to submit a bid to build the line.

Brightline West secures right of way for Vegas high-speed rail; the line should be electrified