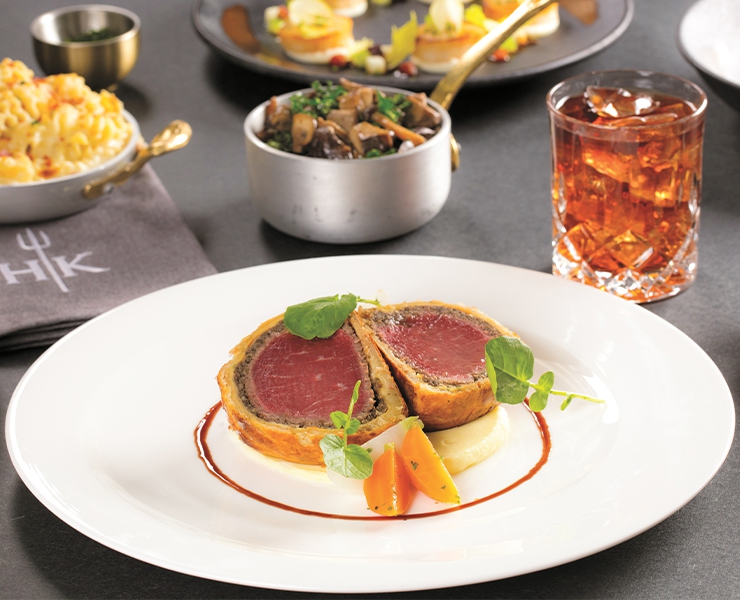 It’s official: no celebrity chef has dominated Las Vegas as much as Gordon Ramsay. In addition to his existing five-restaurant empire that spans four Strip properties, Ramsay is set to open his sixth later this year, Ramsay’s Kitchen at Harrah’s. There doesn’t seem to be a saturation point for Ramsay’s desert outposts, much to the delight of his fans. But no matter how prolific the feisty Scotsman remains, his flagship seems destined to remain Gordon Ramsay’s Hell’s Kitchen, one of the toughest reserves to snag in town.

This restaurant has it all: the perfect location on Roman Square, where you can also find the hit show Absinthe nearby; a great look, including the now-iconic red and blue kitchens to mirror those used on the show, which is now entering its 21st season; and a menu reflecting all the famous dishes that Ramsay is so particular about (although we have a feeling that none of these dishes will be sent back as on TV).

You’ll want to start your experience here with a cocktail, and Hell’s Kitchen has some great options, especially Notes From Gordon – each made with Plymouth dry gin, green tea, lemongrass, peach and lemon. , comes with its own roll-up – a sheet of paper with a famous line from Gordon on the show, such as “This lamb is undercooked, it’s following Mary to school!” There’s also Smoke on the Blvd., Woodford Rye, Aperol, Amaro Averna and Sweet Vermouth, infused with cherry wood smoke in a little box.

Now that your taste buds are awakened, it’s time to explore the delights of this menu. The pan-fried foie gras, served with stewed cherries, Scottish shortbread and candied marcona almonds, is an excellent appetizer, as is the lobster risotto (a dish that fans of the show are familiar with, here consisting of a tail butter-poached lobster, truffle risotto and crispy onions).

Chances are that most newcomers to this establishment will want to try the Beef Wellington. And who could blame them? It’s the essence of Ramsay and his home country, a large cut of medium-rare beef surrounded by a puff pastry shell and served with mashed potatoes, glazed root vegetables and a red wine demi-glace. If you want to take it a step further, get the 8-ounce Santa Carota Beef filet mignon, served with bearnaise sauce. More like poultry? No problem, the Jidori Chicken Cutlets are more than satisfying, served with roasted pee potatoes, artichokes, lacinato kale and truffle chicken jus.

We always recommend saving room for dessert, but nowhere is that more necessary than here, where desserts are practically their own food group. Ramsay’s sticky caramel pudding — for many the best dessert on the Strip, that is, in the world — is beyond decadent, served with dulce de leche ice cream. Coconut 3-Ways offers indulgence in sorbet, passion fruit caramel and coconut cake.

Click here for your free subscription to the weekly digital edition of Las Vegas Magazine, your guide to everything to do, hear, see and experience in Southern Nevada. Along with the latest edition emailed every week, you’ll find plenty of great, money-saving deals on some of the most exciting attractions, restaurants, properties and more! And Las Vegas Magazine is packed with informative content like restaurants to visit, cocktails to sip and attractions to enjoy.

Is Death Valley really the hottest place on Earth?