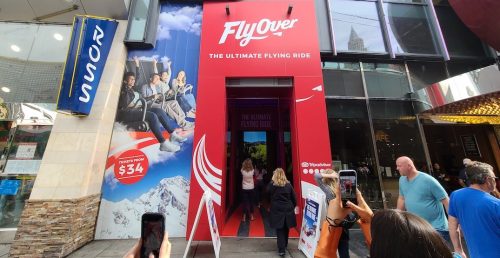 At its southern end, the Las Vegas Strip is reserved by MGM Grand, Park MGM, New York, New York and Aria and the recent addition of T-Mobile Arena, the home rink of the NHL Golden Knights.

This dense cluster of entertainment attractions in this area of ​​Las Vegas Boulevard was further intensified by the recent opening of FlyOver Las Vegas, right next to the Hard Rock Cafe.

FlyOver is an immersive virtual flight that attaches passengers to a 52-foot spherical screen, sending them soaring over the world’s most iconic vistas and natural wonders. And while passengers are suspended with their feet above the natural wonders, the sequences of the experience are strategically aided by the multisensory special effects of wind, mist and natural scents.

FlyOver Las Vegas is the most advanced and largest of the growing number of FlyOver chains of aerial rides by attractions and hospitality company Pursuit.

At a cost of US $ 50 million, it occupies more than 50,000 square feet of prime commercial real estate on the Strip. Clearly visible signage on Las Vegas Boulevard directs shoppers to the main entrance with a hole in the wall that was previously the front of the Famous Footwear store. Guests are then led through a highly Instagrammable illuminated ‘Endless Hallway’ that leads to the former United Artists Showcase Theater – now transformed into two flying theaters for FlyOver.

From the main entrance, passengers pass through three areas to reach a vast hall that bears the theme of the bottom of a canyon.

“The purpose of theming here is a decompression zone. Everyone’s crazy on the Strip; there are strippers, snakes and all kinds of stuff going on there, ”said Jack Kenn, managing director of FlyOver Las Vegas, on a media tour.

“So we want everyone to come in, the section is very light and airy, we are trying to tell you what FlyOver is, we are trying to get you excited about what it is. This is the first step. Adjust your eyes while being outside, then you get your tickets… We descend lower and lower into the canyon as we enter our lobby. All this helps us to decompress, we forget everything that is happening. This is part of the self-guided trip. We’re just trying to decompress here and get away from everyday life.

The lobby also serves as a waiting area and a full-service bar, named The Lost Cactus, where passengers can enjoy beer, craft cocktails, mocktails, wine, and snacks before or after take-off. The bar is accessible without a ticket.

As a mock-up of an airport gate, digital signage and helpful staff notify passengers in the lobby when it’s time for them to embark on their planned journey.

Before being strapped into their flying seats, passengers are guided through a pre-show experience – first to a boarding area, then to a circular room with 360-degree wraparound projection walls and a central screen suspended in the shape of a medallion. This pre-show, designed by Montreal-based Moment Factory, sets the stage for the flying ride as part of the overall storytelling, providing a deep sense of belonging.

The six-minute pre-show highlights the booms and recessions of the American West, from the Cambrian explosion to the ghost towns of the gold rush and the startups of Silicon Valley.

Afterward, passengers strap into the Flying Theater for a quick 10-minute ride that takes them to nearly two dozen natural sites and points of interest across the western United States, including scuba diving. in the Grand Canyon, fly over the expanse of Lake Tahoe. and the colorful Evaporating Ponds of Moab, riding alongside stallions in Yellowstone National Park, riding San Francisco’s biggest waves captured on film 20 years ago, riding the Golden Gate Bridge and a view nightlife through the electric canyon of lights of the Las Vegas Strip.

Expect to be immersed in the best of Nevada, Oregon, Washington State, Montana, California, New Mexico, Utah and Arizona.

The original scores for the FlyOver Las Vegas Pre-Show and Flying Ride were composed by Grammy-nominated Tom Holkenborg, who was also the originator of the soundtracks for Mad Max: Fury Road, dead Pool, Godzilla vs. Kong, and Zack Snyder Justice League.

For all those who have rolled Soaring in Disney theme parks around the world, the concept of FlyOver should be familiar. FlyOver’s original ride to Vancouver wasn’t just inspired by Soaring but it was made by its creator.

Rick Rothschild was executive show director at Walt Disney Imagineering for over 30 years, until 2009. He is hailed for inventing the immersive flight experience; he was responsible for the creation of Soarin ‘, which premiered at Disney California Adventure in 2001.

Rothschild has been the Creative Director of the four FlyOver attractions to date, in which he has designed every aspect of what customers see in FlyOver. While he now has his own business developing creative concepts for attractions, he still occupies a pivotal role as a consultant for Disney Imagineering.

Although there are conceptual similarities, the driving technology used by FlyOver Las Vegas is much more advanced than that currently used by Soaring.

FlyOver Las Vegas uses state-of-the-art mobile platforms made by Brogent Technologies of Taiwan, which have six degrees of movement that allow customers to experience more movement. On the other hand, Soaring has only four degrees of motion.

Kenn notes that the ride, camera, and projection technologies used in Las Vegas are also more advanced than the original FlyOver ride in Vancouver.

Each flying theater in Las Vegas has a capacity of 40 passengers. In each theater, passengers are split over two levels, with each level containing two 10-person mobile platform pods.

With each flight experience – both the pre-show and the flight combined – taking around 30 minutes, FlyOver Las Vegas is capable of handling four trips per hour, accommodating thousands of passengers per day.

Currently, FlyOver Las Vegas dedicates a theater to the screening The real Wild West, and the other theater for Fly over Iceland. Kenn explains that while double rides at other FlyOver attractions are accomplished by letting passengers stay in their seats, FlyOver Las Vegas requires them to board the other theater. This system offers Las Vegas passengers the unique flight-specific boarding and pre-show experience to ensure they are “connected” to the full story of the flight.

Using the secondary theater, other flying rides that will eventually be presented by rotation include Fly over Canada, Fly over America, and Hawaii seen from above. There are synergies to be gained as FlyOver’s network of attractions grows and introduces more of the planet, with each attraction sharing films for alternate rides.

FlyOver Canada opened in 2013 in the former IMAX theater in Vancouver, the Canada Place convention center and the cruise ship terminal. Its eponymous merry-go-round captures the scale, beauty and geographic and urban diversity of Canada.

In 2016, FlyOver America opened inside the Mall of America in Bloomington, but it’s under a different ownership structure, outside of the Pursuit collection.