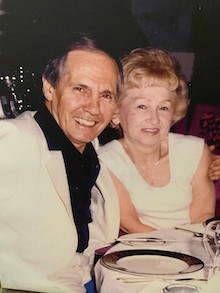 He was born September 1, 1918 on the East Side of Youngstown, the son of Joseph Santini (Sandine) and Mary Mascisia (Mashiska) Sandine.

He attended East High School and the New Castle School of Trades where he became a gemologist.

He married the love of his life, Margaret Ruth Kristof, on November 24, 1938 at the Holy Name of Jesus Catholic Church. They celebrated 76 years of marriage together.

Dominic was very fond of the YMCA youth program. He often said that going there every day saved his youth and that they treated him very well and that they loved him there.

As a teenager, he learned to play table tennis from all of his mentors and he continued to teach children how to play.

He became state champion and was featured in Youngstown Vindicator for these achievements.

Dominic was an excellent pool player. He opened his own billiard room in Cornersburg called Swifty’s Pool Room.

Dominic and his wife loved going on vacation to Florida, where they enjoyed horse racing and played a lot of shuffleboard together.

They also traveled to Las Vegas where Dom was a card dealer in some of the casinos.

He was an incredible poker and baccarat player due to an incredible ability to remember cards. In his later years he continued to buy and sell jewelry, precious metals, coins, and antiques. He took care of auctions and garage sales.

He loved going to the park with his beloved dog, “Swifty”, where he would sit on the benches.

He enjoyed talking about politics, religion and the stock market with his friends at The Donut Shop.

Above all, he lived to eat his wife’s incredible cuisine.

Dominic was a loving husband, father, grandfather and great-grandfather. He was loved by everyone. He encouraged and supported his daughters and grandchildren to build careers and start their own businesses. He was so excited when new grandchildren were born.

Mr. Sandine has long been a member of St. Christine’s Catholic Church in Youngstown.

Besides his parents, Mr. Sandine was predeceased by his beloved wife, Margaret, who died at the age of 96 on January 16, 2015; his sister Carmela; his brothers Ralph Sandine and Mike Sandine; his sons-in-law Joseph Kertis Sr., and James Eckman Sr .; his nephew, Robert Callan; and her niece, Shelley Sandine Loew.

Friends will be received Thursday (December 2) from 5 p.m. to 7 p.m. at Davis-Becker Funeral Home, 8536 Market St., Boardman. A prayer service will be held Friday (December 3) at 11:15 am at the funeral home followed by a Christian burial mass at noon at St. Christine’s Church, 3165 S. Schenley Ave., Youngstown, with Pastor John Jerek officiating. . A lunch will be held at the Sainte-Christine Parish Center immediately after mass. The private burial will take place on Friday afternoon at the Calvaire cemetery.

Mr. Sandine’s family would like to express their sincere appreciation for the wonderful care provided by Hospice of the Valley, Hospice House.

In lieu of flowers, the family is asking for donations to be made to the YMCA of Youngstown, Ohio, 17 N. Champion St., Youngstown Ohio, 44503; Parish of Sainte-Christine; or at Hospice House, 9803 Sharrott Road, Youngstown Ohio 44514.

Due to the new variant of COVID-19, the Sandine family favors wearing a mask for the safety of all.

A’s eyeing the Las Vegas Strip casino as the site for their new stadium?