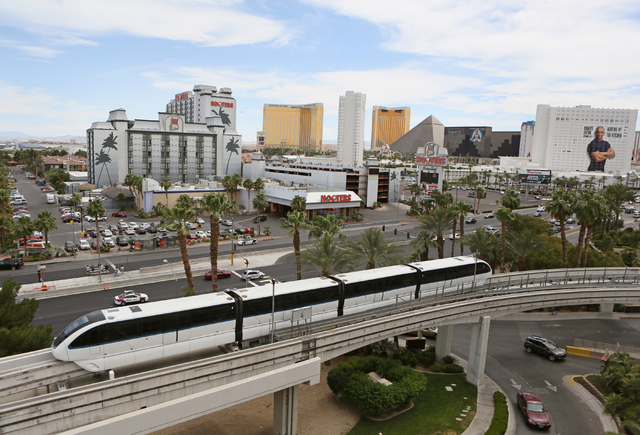 Clark County commissioners, spurred by the Nevada Legislature’s approval of a plan for a stadium that could host the National Football League’s Oakland Raiders, gave unanimous approval to the Las Vegas Monorail on Tuesday. Co. to expand its route from MGM Grand to Mandalay Bay.

Judging by the discussion, some commissioners are eager to extend the monorail even further.

“I just hope we end up getting this (monorail) to the airport. It just seems so logical,” Commissioner Mary Beth Scow said.

Las Vegas Monorail Co. President and CEO Curtis Myles told commissioners that his private nonprofit was in talks with McCarran International Airport about installing a switch on the planned 1.14 mile long extension that could lead to the airport. The extension to Mandalay Bay will bring the already 3.9-mile-long monorail closer to the airport.

The county zoning commission is due to discuss use permit approvals for the project at a 9 a.m. Wednesday meeting in commission chambers.

Once the monorail company gets final approval from the commission, it must obtain funding and begin construction of the newly approved extension within two years, according to the amendment to the franchise agreement passed by the commission.

Construction could start as early as the second quarter of 2017, according to the company. Myles said the extension could be open to the public within two years of the start of construction.

He added that the extension would not prevent the county from installing a light rail system in the future.

The expansion project, which will include a new monorail station and is estimated to cost at least $100 million, will not be funded by the state. Funding would have to come from bonds that would be repaid with revenue from fare-paying passengers.

Attendance is expected to increase when a new $1.9 billion stadium is built at one of two sites within walking distance of Mandalay Bay. According to a traffic assessment report commissioned by the Nevada Department of Transportation board and released in October, a proposed pedestrian bridge would connect the new monorail station to a proposed site on Russell Road.

Myles told commissioners his company is already making plans to extend the monorail route to the stadium itself once it is built.

Commission Chairman Steve Sisolak said he expected the monorail company to extend its line to the Sands Expo and Convention Center as well. This would put the three main convention centers in Las Vegas on a single transit route.

Connectivity between destinations was a big issue during meetings of the Southern Nevada Tourism Infrastructure Committee, Sisolak said. He was disappointed that such plans were not ready for presentation on Tuesday.

“I’m a little surprised you’re at this early stage,” Sisolak told Myles. “One of the things that sold me on this idea was the connectivity, and now it’s not connected.”

Myles said his company is in talks with Las Vegas Sands Corp. regarding the addition of a Sands Expo station.

The monorail has been operating east of the Strip since 2004. It already connects SLS Las Vegas to the MGM Grand and has seven stations, including stops at the Las Vegas Convention Center, Westgate, Bally’s/Paris Las Vegas, Flamingo/Caesars Palace and Harrah’s . /The Linq.

The Review-Journal is owned by the family of Las Vegas Sands Chairman and CEO Sheldon Adelson. Las Vegas Sands operates the Sands Expo and Convention Center. The Adelsons are partners in the Raiders’ stadium project.

Exclusive: The Las Vegas Monorail will run from MGM Grand to Mandalay Bay