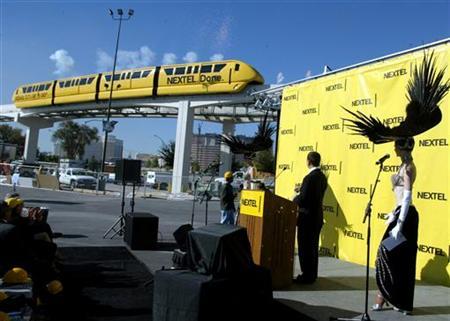 “The decline in monorail operations is directly related to declining gaming revenue in Nevada, and particularly along the Las Vegas Strip,” Las Vegas Monorail general manager Curtis Myles said in a court filing. . Ridership “has not reached the projections formed before the economic collapse,” he added.

Las Vegas Monorail is a non-profit corporation created by the State of Nevada that operates the driverless monorail, a 3.9-mile, seven-stop elevated service connecting multiple hotels on the Las Vegas Strip and the Las Vegas Convention Center. city.

The recession reduced the number of visitors to Las Vegas casinos as well as attendance at conventions. The city also suffered from the collapse of a housing boom.

Ambac said that if the company stops making payments on certain “top tier” senior bonds, “the total exposure under (Ambac’s) policy and bond will be approximately 1. $16 billion.”

He asked the court to dismiss the Las Vegas Monorail‘s Chapter 11 petition and refile his case under Chapter 9, a part of the federal bankruptcy code that applies to municipalities.

Ambac and its rivals have struggled to take on new business since losing their “triple A” credit rating in 2008 following losses from subprime debt and securitisations.

Last year, Ambac warned it could run out of cash and be forced to seek bankruptcy protection.

In his court filing, Myles said the Las Vegas Monorail has used proceeds from seed funding and debt service reserves since 2004 to continue operating, but has now exhausted those resources.

He said that while revenues were enough to cover operations, they were never enough to service debt.

The monorail should continue to operate during the bankruptcy process.