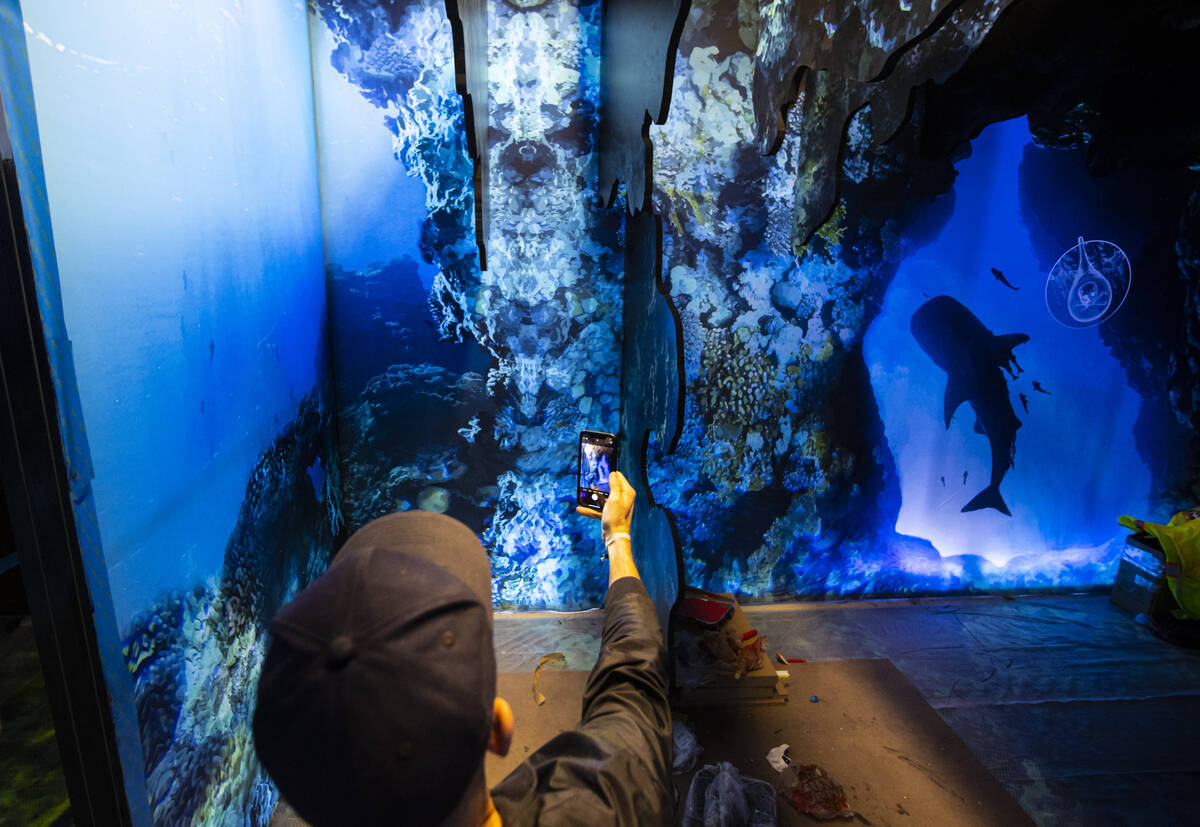 IIt’s time for anecdotes in the rainbow cave.

Walking here, one has the impression of having entered a luminous underground dwelling, flush with artistic installations that flourish in the place of stalactites, or perhaps that we have ventured into the mouth of a giant whale – Ã  la Jonah – whose lungs are filled with blisters. Take a closer look at these walls, however.

“That’s 66,000 plastic bags,” notes Valentino Vettori of what lines the room all around him, “that’s the amount of plastic bags we use each …”

He turns to the reporter beside him to fill in the blank.

Swing and miss there, man.

He doesn’t wait for another bad answer from a reporter. â€œThe solution is a sustainable alternative to plastic,â€ explains Vettori, before offering a quick tutorial on PHA biodegradable plastics. â€œThere are new technologies,â€ he notes. “I think our mission is to learn these things.”

Mission accomplished on a Tuesday afternoon on the Las Vegas Strip near the M&M Store.

We know what you are thinking right now: it would be better if there were lasers. (Of course there are lasers.)

It’s a highly Instagrammable mix of science and selfies meant to educate and entertain at the same time, warning of climate change without resorting to the kind of fuss that makes you ashamed to order a cheeseburger afterwards. (Yes, there is an exhibit here called “Eat Less Meat” with cattle carcasses dangling in cloth, but the message is to eat a little bit less meat, not no meat, so maybe just a salad instead of a Big Mac tomorrow, okay?)

â€œEach piece inspires us something,â€ says Vettori, clad in head-to-toe black, the accent reminiscent of his native Italy. â€œWe inform with a great story, then we ask you, ‘Do you want to do something? “”

Make a change for climate change

He points to the fabric strap on his wrist. Vettori has not removed it for four years. He says he never will. It is a promise he made, a reminder of a decision to act.

Back to the Summit LA conference in 2017.

Vettori, who has a background in the fashion and trade show industries, was there to create a setup piece on the future of retail.

Afterward, he attended lectures from some of the famous speakers including Elon Musk and Jeff Bezos, both of whom spoke of going into space, spending a tremendous amount of resources to escape Earth.

And then he attended a session from Paul Hawken, founder of Project Drawdown, a nonprofit dedicated to researching how global warming can be reversed, and author of â€œDrawdown,â€ a book that lists 100 ways for people to achieve this goal.

The rooms were packed for Musk and Bezos. Almost no one was there for Hawken.

Vettori wanted to change that. â€œI went to see Paul and made a wish. I said, ‘Paul, I will never cut the bracelet,’ â€says Vettori. â€œBecause I’m a storyteller, maybe I should change my value proposition in life, and instead of telling stories for the fashion industry, I could help raise awareness about climate change. “

Vettori then called a meeting with his production team. The question they sought to answer: Why were there so few people to hear Hawken talk about something they considered so important?

â€œWe realized that every time people talk about climate change, it’s in a very negative way: ‘We’re going to die,'” says Vettori. “And the second topic was about how we never hold people accountable, we don’t tell people what they can do, it’s always ‘the scientific community will find out.’

â€œPeople don’t connect with something they don’t feel,â€ he continues. â€œIt was the meaning of Arcadia. I wanted to do something inspiring. So instead of being negative, be amazing – and actionable. Instead of saying “This is the problem”, it’s “You can do something. “”

We entered a honeycomb of abandoned literature.

Halfway through Arcadia Earth is a room designed to resemble a beehive built from the pages of discarded library books.

As with every exhibit here, each opens to a digital screen that details a specific environmental issue, an artist’s statement on the work they’ve created, and a QR code that can be scanned to learn more about the issue. in question – in this case the reduction of the world’s bee population – as well as ecological alternatives to products like, for example, sunscreen, which can damage coral reefs. (Some of these items may then be available in the Arcadia Earth retail area.)

While developing Arcadia Earth, Vettori says he consulted with organizations in the scientific community like Oceanic Global and the World Wildlife Federation to ensure that all of the information provided here was accurate.

Vettori is a geyser of such information on this day. â€œDo you know how much plastic we eat? He asks, talking about tiny microplastics that can infiltrate the food supply chain. â€œOne credit card per week.

“Do you know how much water we need to make a pound of hamburger?” He asks later. â€œFourteen thousand bottles of water – to make five burgers. It is so unbearable.

He leads the way through a red-colored passage filled with ceiling-hung fisherman’s nets that were acquired from the docks in Maine, warning of the dangers of overfishing. Nearby, pulsating blue walls adorned with diatoms appear to breathe in a room where oxygen comes from – 70 percent is derived from the ocean.

The Vegas Arcadia Earth location follows a pop-up version in New York City, which debuted in 2018, self-funded by Vettori.

â€œI took advantage of my house and everything,â€ he says.

Vettori was motivated to expand to Las Vegas in part by the city’s environmental history, citing its water and food recycling efforts and the large solar panel fields nearby.

â€œWhen people ask me, ‘Why are you going to Vegas? â€œI said, ‘Vegas has a lot of really good environmental efforts,’â€ he explains. â€œ’We could be there to make an even bigger difference. “”

Arcadia Earth is scheduled to open on December 23, and tickets go on sale Wednesday. Vettori says it will be considerably more elaborate than its predecessor.

There is a personal dimension to everything for Vettori, a father of two. In a way, it all comes down to a father and his two daughters.

â€œI feel like if I was a good father 20 years ago I might have thought, ‘I’m going to give them a good education.’ It was the mission, â€he says. â€œAnd then over the last few years I’ve started to realize that if I’m a good dad, I should really try to give them a good planet.

â€œThere are options; we have options, â€he explains. â€œPeople can make a difference, if they know what to choose. “